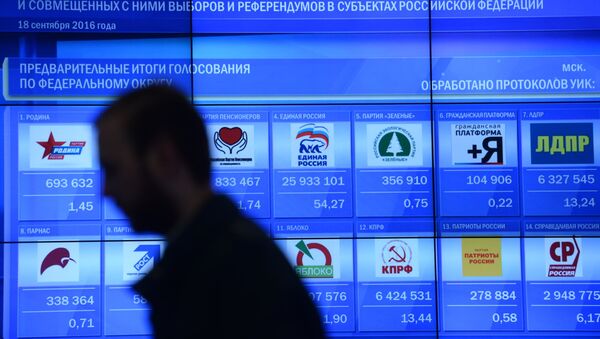 © Sputnik / Kirill Kallinikov
/
Go to the photo bank
Subscribe
The United States sent 63 representatives to observe the election process during the recent elections to the State Duma, the lower house of the country’s parliament, a member of Russia's Central Election Commission responsible for international cooperation said Monday.

MOSCOW (Sputnik) — On Sunday, the Russian citizens cast their ballots to elect the State Duma.

"Numerous international observers attended Russia's election. Sixty three states located in Europe, Asia, Africa, North and Latin America have sent their representatives [to monitor the elections]. Kazakhstan had the largest representation of 102 representatives, 69 were from Belarus, 63 from the United States," Nikolai Levichev said.

He added that Russia would keep a close eye on the representation of foreign observers at the upcoming presidential election in the United States.

CIS Mission Praises 'Transparency and Democratic Nature' of Russian Elections
According to preliminary results, the United Russia gathered support of 54.22 percent of the voters, the Communist Party gained 13.68 percent of the votes, the Liberal Democratic party has 13.42 percent, while A Just Russia won 6.16 percent. Taking into consideration the single-member constituencies, the United Russia gains 343 seats in the parliament, with 42 seats for the Communist Party, 39 for the Liberal Democrats and 23 for A Just Russia.

000000
Popular comments
A complete joke for the Obama government to be monitoring anyone's elections. More like looking for a way to manipulate that country's system for fraud.
jas
19 September 2016, 14:30 GMT
000000
So the US is dissapointed by the elections .Is this because the Fraud they were seeking was actually not only nonexistent but located on the continent of North America?