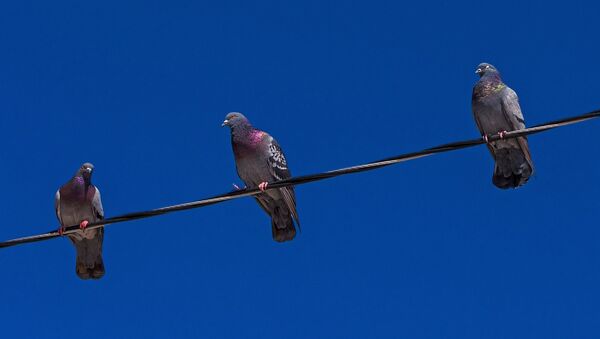 New Zealand and German psychologists found out that pigeons can count from 1 to 9 and distinguish real words from nonsense, according to an article published in the journal Proceedings of the National Academy of Sciences.

Since a study, conducted at the University of Otago, New Zealand, revealed that pigeons can actually distinguish “words" from “non-words," “bird brain” could be considered as a compliment.

Scientists Prove Dogs Really Do Understand What We Say to Them
In 2011, Damian Scarf, professor at the University of Otago, discovered that pigeons are clever enough to distinguish numbers from 1 to 9 and select a group with the biggest number on the screen.

In the recent experiment, scientists trained four pigeons to hit four-letter words as they appeared on the screen, or to hit a star symbol instead if a four-letter non-word popped up.

The researchers added up words one by one, thus increasing the birds’ vocabulary. By the end of the study pigeons learned from 26 to 58 real words and approximately 8,000 non-words.

As a result, pigeons were able to distinguish meaningful words from nonsense with a probability of more than 50 percent, meaning that the pigeons made a deliberate choice.

To check the study’s accuracy, scientists introduced new words that pigeons were not previously taught. Surprisingly enough, the birds correctly distinguished the new words. This means that pigeons were actually learning and understanding rather just memorizing them.