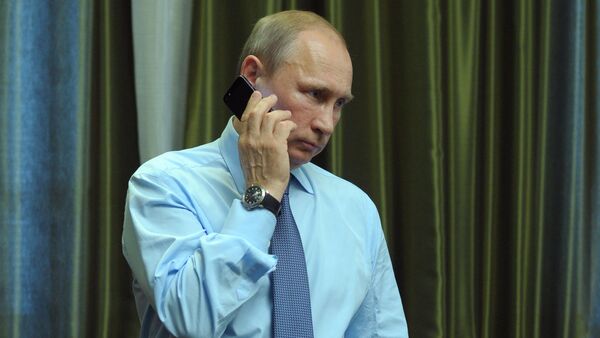 © Sputnik / Alexei Druzhinin
/
Go to the mediabank
Subscribe
International
India
Africa
The Russian president doesn't plan to have a phone talks with his US counterpart.

Lavrov Reiterates Call to Make Syria Deal Public in Phone Talks With Kerry
MOSCOW (Sputnik) – Russian President Vladimir Putin does not have plans for a phone conversation with his US counterpart Barack Obama yet, Kremlin spokesman Dmitry Peskov said Monday.

“No. Now there are no plans to hold the phone conversation,” Peskov said, answering a question if phone talks with Obama on latest developments in Syria were on Putin's agenda.

On September 9, Russian Foreign Minister Sergey Lavrov and US Secretary of State John Kerry announced a new peace plan to address the five-year conflict in Syria. The ceasefire stipulated by the agreement came into force on September 12.

The ceasefire was, however, threatened by a US-led coalition’s airstrike targeting the Syrian government troops. The airstrikes near the Deir ez-Zor airport were first reported by the Syrian army on Saturday.

Later in the day, the Russian Defense Ministry confirmed the attacks, saying they killed 62 servicemen and injured 100 more. The US Central Command said that the Syrian forces were mistaken for fighters from Daesh, a jihadist group banned in the United States and Russian among other countries.