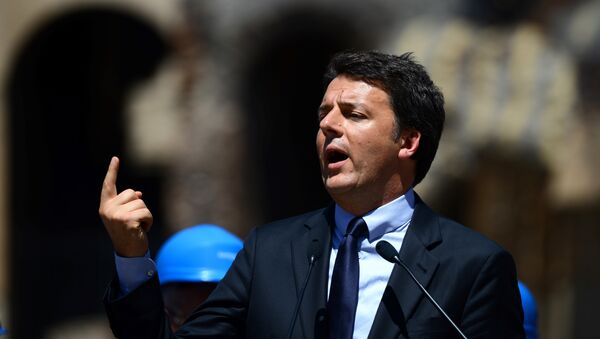 The European Central Bank allocates billions euro to keep Italy's economy afloat. However, instead of helping the country to rise to its feet, it doesn't seem to have much positive effect on the Italian economy, German newspaper Die Welt wrote.

Italy to Hold 2018 Elections Regardless of Constitution Referendum Outcome - PM
The ECB funding has failed to improve the economic situation in the country, with Italy being the only Eurozone country the economy of which has been in regression since 1999.

"Italy urgently needs growth," the newspaper wrote. "Even Greece and Portugal managed to boost their economies a little after the establishment of the Eurozone."

According to Die Welt, the Italian labor market has been hit by the economic crisis most of all. The unemployment rate in Italy (11.4%) is not the highest in the Eurozone. However, youth unemployment has reached 39.2%, which is the worst among all countries of the monetary union.

Financial analyst at Deutsche Bank Marco Stringa is not too optimistic about the prospects of the Eurozone in general. However, in his opinion, the outlook for Italy is particularly grim.

"Italy is known for its political instability, but what we are experiencing now, we've never seen before," Stringa told the newspaper.
Most economists are concerned about two things: a "dangerous correlation between the troubled banks and the weakening state" as well as "the upcoming referendum in late autumn."

Renzi is facing a difficult referendum on constitutional reform this fall, which would strip the Senate of its current powers over the budget and its ability to bring down a government, cut number of senators to 100 from 315 and change the process of their election, with senators to be hand-picked by the government from local councils across the country rather than elected directly.

Renzi Told to Put Italy First and Stop 'Being a Servant to Other Countries'
In May, Renzi announced he would stake his political future on the referendum, promising to quit if he failed to convince voters to support the need for constitutional change.

According to Stringa, the Italian referendum is the biggest political risk for Eurozone. The analyst is mostly concerned about the scenario in which Renzi will lose and quit, leading to a new election that will bring victory to the populist movement "Five stars," opposed to the European course.

Although experts do not believe that Italy would withdraw from the Eurozone, they fear that the new government would cancel all required reforms, and the debt will continue to grow.