Hillary 'Looking Forward to Being a War President on Day One' 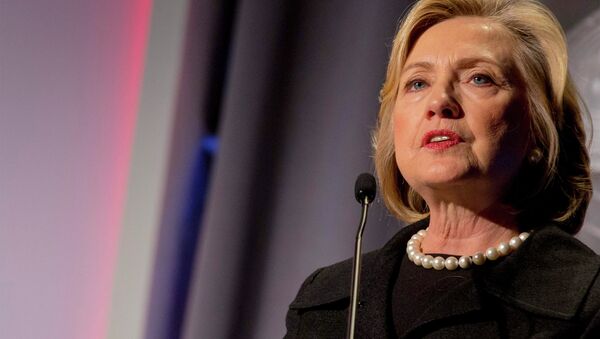 © REUTERS / Brendan McDermid
Subscribe
International
India
Africa
Judging by Hillary Clinton's extensive foreign policy record, including here support for the 2003 US invasion of Iraq and the 2011 NATO intervention in Libya, as well as her embrace of the controversial use of drones, the former US secretary of state has no reservations when it comes to conducting a muscular and assertive foreign policy.

Clinton's record suggests that should she be elected the next US president in November "she's looking forward to being a war president on day one," Micah Zenko, a senior fellow with the Center for Preventive Action at the Council on Foreign Relations, said. "By any reasonable measure, Clinton qualifies as a hawk, if a nuanced one."

True, Clinton is well-known for championing America's infamous invasion of Iraq and NATO's intervention in Libya.

Ex-Haitian Senate Leader Accuses Clintons of Bribery, Stealing Billions (VIDEO)
The former US secretary of state voted in favor of the 2002 Congressional Resolution authorizing the use of military force against Iraq. This document paved the way for the 2003 US invasion of Iraq, a war that has been credited with fomenting sectarian violence in the country and the region, as well as giving rise to Daesh, one of the most brutal groups the world has ever seen.

Clinton was also "instrumental in NATO's 2011 war in Libya, which resulted in the ousting of Muammar al-Qaddafi and the complete destruction of Libya, a country that previously had the highest standard of living on the African continent," independent writer, researcher and geopolitical analyst Steven MacMillan asserted in a recent piece for the New Eastern Outlook added.

"Make no mistake about it: she is a neocon and a war hawk," he added.

The Obama administration has been notorious for embracing covert drone wars in the Middle East and Hillary Clinton was no exception. "As Secretary of State, Hillary Clinton wholeheartedly backed the drone campaigns in Pakistan and Yemen," Steve Coll wrote for the New Yorker in November 2014.

Trump Takes Huge Seven Point Lead in LA Times Poll as Black Voters Ditch Clinton
Figures support this assessment. The CIA carried out a total of 294 drone strikes while Clinton served as the US secretary of state. These attacks claimed 2,192 lives, including 226 civilians. Top US diplomats, who could weigh in on upcoming drone operations, objected to only one or two of the drone strikes during Clinton's tenure at the State Department.

It is this record that has helped to forge a perception of Clinton as a politician with a "bias toward action," writer Kevin Sullivan noted.

Republican presidential nominee Donald Trump recently used this assumption to attack Hillary, describing her as "trigger-happy." He further said that "sometimes it seemed that there wasn't a country in the Middle East that Hillary Clinton didn't want to invade, intervene in, or topple."

"With a likely unfriendly Congress determined to push back against Obama's signature policy achievement in the region, last year's nuclear agreement between Iran and six world powers, Clinton would probably be a president locked in by the decisions of her predecessors and by an American public with little appetite for more costly foreign adventures in the Middle East," Sullivan observed.

Hillary Clinton's foreign policy will also be dependent on her fiscal priorities.

"She wants to expand domestic spending and entitlements in a way that would inevitably starve defense," the WSJ observed. As a result, "her likeliest path as president is continuing to retreat at a somewhat slower pace."