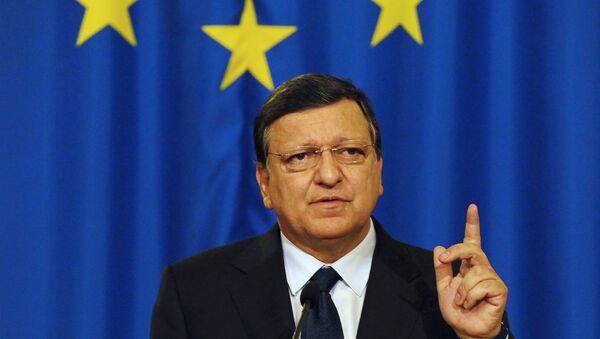 © AFP 2022 / Attila Kisbenedek
Subscribe
A group of EU employees has started a petition against the former President of the European Commission, Jose Manuel Barroso, taking up a post at Goldman Sachs investment bank's London headquarters to help it limit the negative effects of Brexit.

Barroso — who was European Commission president from 2004 to 2014 — was appointed non-executive chairman of Goldman Sachs International (GSI) only 20 months after leaving office. He will also be an adviser to Goldman Sachs.

In its announcement of Barroso's appointment, the US investment banks said: "His perspective, judgement and counsel will add great value to our GSI Board of Directors, Goldman Sachs, our shareholders and our people." However, critics said it would afford Barroso enormous lobbying power and was derided as another example of the "revolving door" of outgoing Euro chiefs.

​Now, an anonymous and spontaneous group of employees of the EU institutions launched a petition which has reached nearly 150,000 signatures. According to campaign group Transparency International, which interviewed EU employees on condition of anonymity:

"It all started a few hours after the announcement that Mr. Barroso was joining Goldman Sachs, a bank directly involved in the worst financial crisis since the 1930s. Several colleagues from all EU institutions immediately reacted, sharing their indignation and started writing a text in order to express this feeling of outrage and betrayal by our ex-President."

The employees said they were: "Outraged. Betrayed. Slammed in the face. And then very worried about the disastrous image for our institutions, our project, our European future. After all the bad news about the future of Europe: the refugee and migrant crisis, the crisis unleashed by the Brexit referendum, the continuing economic crisis, and the crisis over the kind of Europe we want, this was the last straw."

"It is irresponsible because it feeds into a political context which is not only euroskeptic but now even openly europhobic, where certain political representatives even from the majority in the European Parliament start to openly question the continuing existence of the European Commission and the Community method which — in times of past crises to important advancements — have served to build the European Union since the Treaty of Rome.

"It is damaging to the European institutions in the current delicate context of having to manage multiple crises piling up one after another — the refugee and migrant crisis, the crisis unleashed by the Brexit referendum, the continuing economic crisis, and the crisis over the kind of Europe we want. It is, at the worst possible moment, a disastrous symbol for the Union and a gift horse for the Europhobes that a former Commission President is associated with the unbridled and unethical financial values that Goldman Sachs represents."