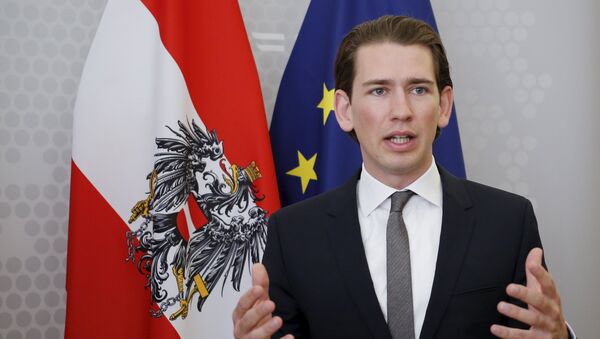 Instead of helping refugees, EU’s open-arms policy encouraged many more to risk their lives at sea and cost Austria control of its borders, its foreign minister said Monday.

Austria Threatens to Sue Hungary Over Migrants
MOSCOW (Sputnik) — A million people have transited to Germany and beyond after Austria opened its borders to refugees fleeing war and poverty in Africa and the Middle East last year. Thousands vanished during the perilous journey across the Mediterranean.

"The most shocking consequence is that our open door policy did not stop the drowning in the Mediterranean, it just motivated more and more people to start this dangerous journey," Sebastian Kurz said at the UN migration summit in New York.

Kurz said some 100,000 had applied for asylum in Austria. Around 1.8 million out of 8 million in the country currently have a migration background.

He stressed that immigration had made Austria such a diverse nation, but added that no country had the capacity and resources to take in and successfully integrate unlimited numbers of migrants.

"I also learned that the success of immigration also depends on the numbers of immigrants. And that we can only reach the goals just mentioned if the numbers are not too high," Kurz said.

He thanked Western Balkan countries for no longer waving paperless migrants through, saying not only those in need but also those who could afford paying smugglers had made it into the heart of Europe.