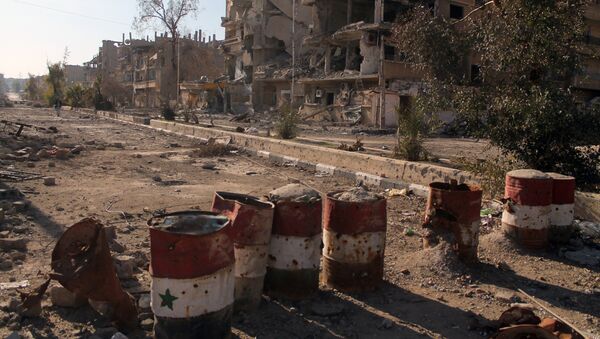 While the Pentagon claimed that US coalition's strikes on the Syrian Army in Deir ez-Zor was unintentional, Moscow and Damascus said that the attack has led to Daesh's advance in the region. Sputnik spoke to political analyst and commentator on Middle Eastern affairs, Hafsa Kara-Mustapha.

“This is not a mistake and it can’t be, primarily because there cannot be a military exercise during an agreed ceasefire period. The American airplane had nothing to do flying over there at that time period when a ceasefire was agreed and officially announced,” Kara-Mustapha said.

She added that the action was a violation of the agreed ceasefire, she also added that the US military is equipped with the best military hardware that can actually determine who is who and where.

“It was abundantly clear that the targets were the official Syrian military. The idea of dismissing it as a mere mistake is ridiculous.”

Strikes on Syria Army Reveal Washington's True Goals - Iranian Official
“What this has achieved is essentially giving ISIS [Daesh] an upper hand once again. They were surrounded; they were considerably weakened as a result of Syrian and Russian efforts and this latest American exercise killing 60 Syrian soldiers and injuring hundreds has actually given ISIS the upper hand once again,” Kara-Mustapha said.

She further spoke about the emergency UN session to discuss this which was called on by Russia and how the US ambassador to the UN called Russia’s effort as a "stunt."

“The idea that the [US] could actually violate the ceasefire and then complain of being the victims of a stunt is a hypocrisy beyond classical,” the analyst said.

She further spoke about the dishonesty and how blatant the US is in pointing fingers at others.

“This is a nation that has been dishonest in its dealings with the Middle East for nearly a century now.”

She further said, “We have seen the results of American intervention in Iraq, it resulted in the creation of ISIS and we know that many of ISIS figureheads were nurtured and brought up in camps. What is resurfacing from this is the complicity between ISIS and the US which is becoming far more obvious to all,” the analyst said.

Kara- Mustapha said that what was dismissed as conspiracy two to three years ago now is becoming quite obvious and that is that Daesh’s interest and the US interest converge.

According to the Russian Ministry of Defense, two F-16 fighter jets and two A10 ground attack aircraft entered Syrian airspace from Iraq and launched airstrikes on Syrian government troops near the Deir ez-Zor airport, leaving at least 62 Syrian servicemen killed and more than 100 wounded.