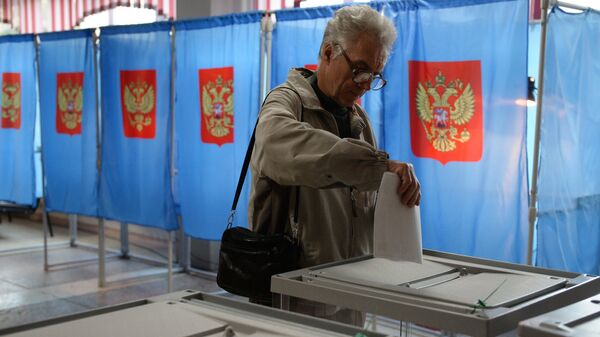 Polling stations in central Russia have opened for voting in Sunday's elections to the country's lower house of the parliament, the State Duma.

Russians Living in India’s Goa Cast Their Vote for Election in Russia
MOSCOW (Sputnik) — The residents of Russia's far eastern Kamchatka Territory and the Chukotka Autonomous Area were the first to vote as polling stations opened nine hours ago at 23:00 Moscow time (20:00 GMT) on Saturday. The Kaliningrad Region's voters will close the day's voting at 21:00 Moscow time later on Sunday. Polling stations are open between 08:00 and 20:00 local time across of Russia's time zones.

Over 111 million voters are eligible to vote in Russia, with 1.87 million of these currently abroad. Some 95,000 polling stations will be open across Russia throughout election day, while another 371 have been set up in Russian diplomatic missions in 145 countries.

Most polling stations are located in schools and other education facilities. Some may also be set up inside military facilities and court buildings, as well as on vessels, at polar research stations, in hospitals, holiday resorts, airports, train stations and detention facilities.

Russian Parliament Election Campaign Marred by Attempts to ‘Spread Lies’ – Putin
On Saturday, Russia’s Central Election Commission (CEC) chair Ella Pamfilova said that adequate security measures will be ensured on election day, with polling stations to be staffed with police, inspected for fire hazards and equipped with the necessary technology, including metal detectors.

Video monitoring has also been set up in 15 regions and in 13 largest cities. Around one third of all polling stations will therefore be monitored by video surveillance, covering up to 40 million voters.

During Sunday's elections, Russian voters will choose representatives to the Russian parliament's lower chamber of 450 seats. Half of the lawmakers will be elected from the party lists, while another 225 seats are contested in a single-member constituency race.