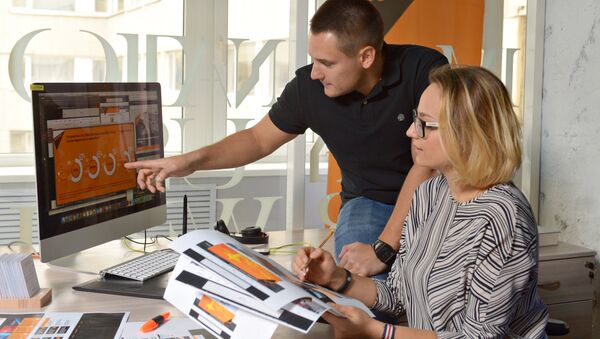 Head of the design centre at Sputnik News Agency and Radio, Anton Stepanov, delivered a well-received lecture on Saturday 17th September as part of Sputnik's working partnership with the London Design Biennale.

LONDON (Sputnik) — Stepanov spoke about the importance of visualisation and analysis during construction projects and during periods of social change, using examples from Russian history to support his case.

The world-renowned design expert also discussed the return to infographics in the design industry and their importance in presenting information in a clear, simple, and easily understandable way, drawing on examples from the ongoing international public opinion project – Sputnik.Polls.

Sputnik Opens High-Tech Editorial Center in Kyrgyzstan
Stepanov is a highly successful designer with around 20 years of experience working in design. Having previously worked as a senior art director with Axel Springer, Stepanov joined the Sputnik design centre in 2014. Under his leadership, the design centre has gone on to win several prestigious international competitions in design and infographics, including the Annual Communicator Awards in both 2015 and 2016 as well as the European Design Awards 2015 for his work on infographics on the Berlin Wall.

The first ever London Design Biennale, held in the luxurious surroundings of Somerset House, brought together participants from over 30 countries including Japan, the UK, Russia, and the United States for a celebration of the best in design. Representatives from top centres of design, including the Moscow Design Museum and the Victoria and Albert Museum, were in attendance for the presentation of many newly commissioned works that explored the theme of the Biennale – 'Utopia by Design.'