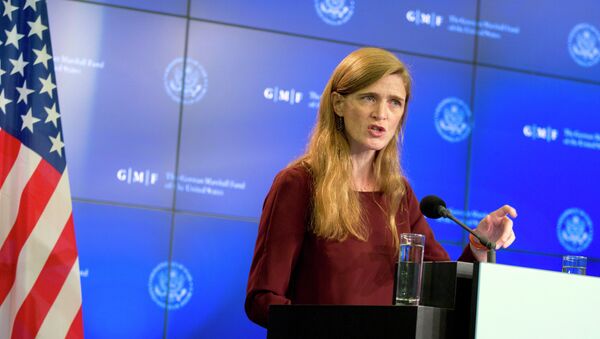 The United States Ambassador to the United Nations took a truculent tone during the emergency meeting on Saturday accusing Russia of bombing civilians and blaming the Assad regime for the rise of ISIS calling the meeting "grandstanding," a "stunt," and a "game" after 80 Syrian Army forces were killed in a US-Led airstrike.

During the emergency UN Security Council meeting on Saturday called by Russia only hours after a US-led airstrike degraded Syrian Army positions leading to the death of some 80 soldiers and "paving the way" for a major Daesh offensive, the United States Ambassador to the United Nations refused to offer remorse but instead laid the blame for the crisis in Syria directly at the feet of the Russian Aerospace Forces who she says is "bombing civilians" and the Assad regime who she claims gave rise to Daesh.

"What Russia is alleging tonight is that somehow the United States is undermining the fighting against ISIL. The Russian spokesperson even said that the United States might be complicit in this attack… This is not a game," said the diplomat before going into details on the United States fight against the terror group.

"The Syrian regime that bills itself as the fighter against ISIL let the group grow and grow. ISIL took root and prospered right next to the Assad regime," said Power. "The best way to fight ISIL and al-Nusra Front is to stop bombing civilians and deliver the Assad regime. Assad's tactics have been a gift to terrorists. There is a better way forward, but Russia really needs to stop the cheap point scoring and grandstanding and focus on what matters. The implementation of something that we have negotiated in good faith with them."

"We regret the loss of life, but since 2011 Assad's regime have been striking Syrian civilians relentlessly," exclaimed the American diplomat in an attempt apparently to justify the violation of the ceasefire or to downplay the urgency of the meeting at hand. Some who watched the statements by Samantha Power described it as the US Ambassador to the United Nations blaming Assad for US warplanes bombing his forces.

The verbal assault offered by Samantha Power looks to do little to quell growing tensions between the United States and Russia, the latter of which wonders if the ceasefire deal was negotiated in good faith after Syrian forces were decimated by American airstrikes on Saturday.

Russia also argues that the so-called "moderate" rebels, with whom the United States has aligned themselves with, have intensified rather than drawn back attacks since the ceasefire began on September 12. The Obama administration finds itself in a tricky predicament regarding the rebels who have outwardly aligned themselves with the al-Nusra Front terror group, formerly Syria's al-Qaida affiliate, under the umbrella group "The Army of Conquest."