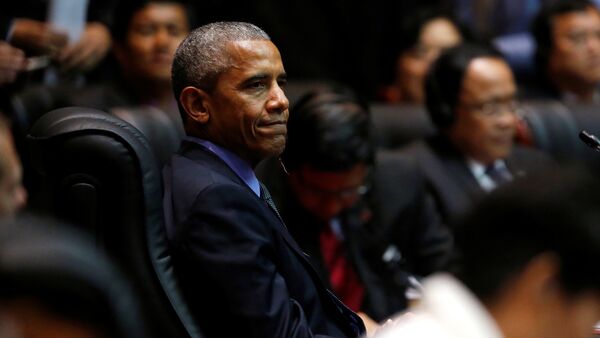 © REUTERS / Jonathan Ernst
Subscribe
International
India
Africa
An Obama administration official offered an official statement of regret for the loss of life caused by a US-led airstrike against Syrian Army positions in violation of a ceasefire -- an attack that led the Russian Foreign Ministry to wonder whether the White House is aiding Daesh.

The Obama administration offered a formal apology for the "unintentional loss of life" after an airstrike conducted against Syrian forces on Saturday killing at least 80 soldiers loyal to the Assad regime. The airstrike came only five days into the breakthrough ceasefire agreement between the United States and Russia that called for the two parties to coordinate strikes and for the Obama administration to levy more pressure against the so-called moderate rebels to disband from al-Nusra Front terrorists.

The attack was immediately condemned by both the Russian and Syrian Foreign Ministry, but the diplomatic row intensified after the US Central Command released a statement saying that while the airstrike was unintentional, they had previously notified Russia of the intent to strike.

Russia vehemently denies the claim that they were notified that a strike was pending against the Syrian Army base in Deir Ez-Zor.

In the statement, the White House also expressed a commitment to adhering to the ceasefire agreement despite the tragic airstrike.

Speaking before the United Nations Security Council during an emergency meeting on Saturday, the United States Ambassador to the international body Samantha Power reiterated America's apology for the unintentional Syrian military deaths reiterating the word "regrets."