Germany Has Been in Charge of EU's Future, 'But Now It Cannot Handle It' 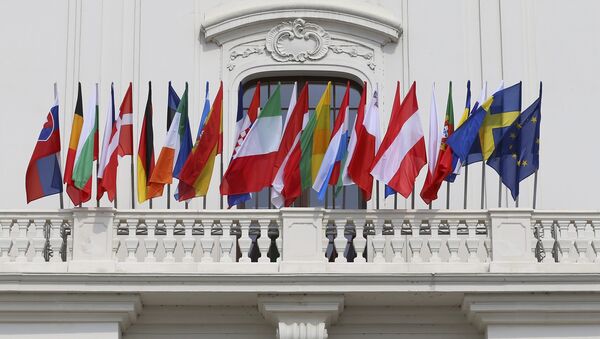 The European Union is in crisis and needs reforms to overcome the stalemate. This was the keynote of an informal EU summit which took place on Friday in Bratislava. The main problem for the bloc is not refugees and terrorism but the lack of common vision regarding its future, an expert said.

The first EU meeting without Britain, an informal summit in Bratislava on Friday resulted in no concrete decisions. At the same time, EU leaders stressed the need to tackle the Europe-wide challenges, including the migrant crisis, terrorism and economic problems.

EU Wants to Stop Illegal Migration, Improve Situation on Ground - Merkel
Opening the summit, Slovak Prime Minister Robert Fico said, referring to Brexit, that the meeting was aimed to work out a roadmap for the EU’s future.

"We want to demonstrate unity. We want to show that the European project will go on," he said.

In turn, German Chancellor Angela Merkel was not that optimistic.

"We are in a critical situation. The point is that we need to act to prove that we can do better," the chancellor said just before the summit kicked off on Friday.

The informal summit was announced by President of the European Council Donald Tusk on June 29, a few days after the British people vote for the UK’s withdrawal from the EU.

Bratislava Summit Should Provide EU With Clear Plan of Reforms - Hollande
Merkel’s words came as a warning sign. Germany, often regarded as the informal leader in the bloc, has faced numerous difficulties due to the migrant crisis. The country has already accepted over one million refugees from the Middle East. The open-door policy declared by Merkel has sparked nationalist sentiment across the country.

"For the first time in decades, senior European leaders have actually envisioned publicly the possibility of the disintegration and collapse of the European Union," Michael Leigh, a senior fellow at the German Marshall Fund told Politico.

Thus, Tusk highlighted the three most serious challenges which were discussed at the meeting. They are illegal migration, terrorism and the rise of Eurosceptic sentiments and movements across Europe.

The main problem for the EU is not refugees and terrorism but the "lack of common outlook for the future," Vladimir Bruter, an expert at the International Institute for Humanitarian and Political Studies, said.

"This was the very same reason why the British people decided to leave the EU. Germany has been in charge of Europe’s common future but now it cannot handle it," Bruter told the Russian online publication Gazeta.ru.

EU Members Should Cooperate to Address Root Causes of Migration Crisis
According to the expert, Merkel’s words "were 10 years late" and her policy is now facing growing opposition in Germany.

At the same time, Polish political analyst Jakub Korejba said the summit in Bratislava was a positive step.

"The EU leaders admitted the problems they previously ignored. They admitted that Brexit and the migrant crisis are not the reasons but results of the issues within the EU structure," Korejba pointed out.

At the same time, he noted that the summit demonstrated divisions within the bloc.

According to Bruter, Germany and France want deeper integration while their opponents call for more authorities for national parliaments.

"The summit proved that the EU is in a deep crisis and facing a number of challenges. But at the same time, it proved that no one wants the EU to collapse," he added.

In addition to refugees, border control issues and common security and defense problems were on the agenda at the summit.

Poland Ready for Lisbon Treaty Amendment to Reform EU
"People in Europe want to know if the political elites are capable of restoring control over events and processes which overwhelm, disorientate, and sometimes terrify them," Tusk said in a letter.

He also underscored that Brussels should not further concentrate power and should give more authorities to national governments.

"My talks with you clearly show that giving new powers to European institutions is not the desired recipe. National electorates want more influence on the decisions of the Union. Adopting this direction would nonetheless require a change of attitude of national governments towards the European Union as such," the letter read.

During their meeting in Bratislava, French President Francois Hollande and Angela Merkel called for the EU members to work out a new project of European integration.

According to Tusk, the EU will have to "take several difficult decisions" which require "strong political will and imagination."

Now, Brussels has six months to elaborate reforms in several fields, including the refugee crisis, border control and social security.

During an additional press conference, Merkel said that the plan is expected to be ready by March 2017. The milestone will be the 2017 EU summit in Rome which will mark the 60th anniversary of the Treaty of Rome.

Plans to Establish a European Army

UK to Oppose Moves on Creation of EU Army Until Brexit Completed
During the summit, proposals were made to establish a common European army. The idea has been promoted by France and Germany.

Earlier, President of the European Commission Jean-Claude Juncker said the EU is considering establishing its own foundation for defense research and investments to maintain defense capabilities. He also said that the bloc planned to create a joint headquarters to coordinate military operations.

However, it is unclear how defense spending will be distributed between the country members. In addition, European NATO members also pay for the alliance’s defense needs.

For the first time in history, an EU summit was held without Britain. Brexit was one of the main topics on the agenda, taking into account growing Euroscepticism in the bloc.

Participants of the meeting agreed that after Brexit the EU faced serious questions regarding its own future.

"It would be a fatal error to assume that […] British Euroscepticism is a symptom of political aberration or merely a cynical game of populists exploiting social frustrations. […] The Brexit vote is a desperate attempt to answer the questions that millions of Europeans ask themselves daily, questions about the very essence of politics," Tusk said in the letter.

The EU is interested in having friendly relations with Britain but Brussels has a firm stance towards London: Brexit means Brexit.

The current European Parliament will work until July 2019. According to Article 50 of the Lisbon Treaty, the negotiations on the withdrawal can take up to two years. Thus, Brussels expects a notification from London by summer 2017.

However, there is the risk that by that time the EU would face another "-exit." On Tuesday, Luxembourgish Foreign Minister Jean Asselborn in an interview with Die Welt called for excluding Hungary from the bloc for systemic violations of the EU’s fundamental principles.

"[Those] who build fences against refugees like Hungary does, or who violate press freedom and judicial independence, should be excluded temporarily or forever from the EU," the politician said.