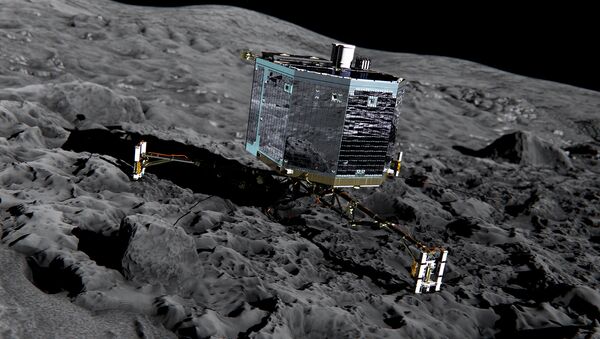 © AP Photo / ESA/ATG medialab
Subscribe
International
India
Africa
On September 30 the Rosetta spacecraft will close in on Comet 67P/Churyumov-Gerasimenko after logging 6 billion kilometers across our solar system and will start its final dive towards the comet’s surface bringing its historic 12-year trek to an end.

Launched  in 2004 by the European Space Agency, the Rosetta probe has spent the past two years circling the comet measuring it from various distances and angles.

In November 2014, the Rosetta had come within 22 kilometers of the comet’s surface and sent down Philae, a 100kg lander that was to collect samples of the comet’s material for on-site chemical analysis reached the comet.

After two unsuccessful attempts Philae finally managed to land, but, unfortunately, on a dark side of the comet, which considerably shortened its life as the solar panels were unable to generate enough energy to keep it running for long.

Rosetta Mission Extended, to End With a Bump in September 2016
Sixty hours and several linkups with the Earth later Philae went to sleep in order to conserve energy.

Scientists hope that the obtained information will offer new insights into the origins of the solar system.

On June 13, 2015 Philae “woke up” again sending down more information before finally signing off.

Deep under their icy crusts, comet cores, which have hardly changed over the past 4.5 billion years, still contain the chemical traces of the solar system’s birth.

During its two years of circling the comet the Rosetta has sent down a wealth of invaluable scientific information about the Sun and our solar system in general.

Having traveled further from the Sun than ever before, and faced with a significant reduction in solar power it needs to operate, Rosetta’s destiny has been set.

On September 30 it will follow Philae down onto the comet’s surface sending the final bits of information before it finally comes to rest on a chunk of rock and ice lost in space.

Churyumov-Gerasimenko comet is named after its discoverers — Klim Churyumov and Svetlana Gerasimenko.

It was first observed in 1969, when Chuyuimov and Gerasimenko visited the Alma-Ata Astrophysical Institute in Kazakhstan to conduct a survey of comets as part of a team of astronomers from Kiev.