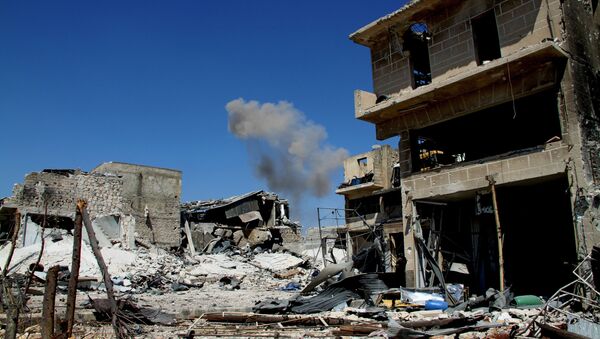 The United States is still not prepared to publicly publish the details of the US-Russian negotiated Syrian ceasefire agreement, US Department of State spokesperson John Kirby stated in a briefing on Friday.

US State Dept. Unable to Speak to How Turkey Vets Forces in Syria
WASHINGTON (Sputnik) — Earlier in the day, Russian Foreign Minister Sergei Lavrov told US Secretary of State John Kerry in a phone call that the entire package of US-Russian agreements on Syria should be made public. Lavrov, in addition, implored Kerry to ensure the opposition abides by the ceasefire.

"Our view on that issue has not changed," Kirby said when asked if the United States was ready to make the Syria ceasefire deal public as called for by Russia.

Kirby claimed the United States does not need to be reminded of its responsibility with respect to the opposition complying with the Syrian ceasefire.

No Joint Implementation Center in Syria if Aid Access Not Granted By Monday
Lavrov also told Kerry that the list of Syrian opposition groups the United States provided to Russia for inclusion in the ceasefire contained "blatantly terrorist formations" that have cooperated closely with the Nusra Front terror group.

On September 9, Lavrov and Kerry announced a new peace plan to address the five-year conflict in Syria that called for a ceasefire to come into force on Monday.

If the new ceasefire in Syria lasts for seven days, Russia and the United States will work together to establish a Joint Implementation Center and carry out joint airstrikes against terrorists in the war-torn country, according to the deal.