Over 500,000 Russians Registered in Germany May Vote in State Duma Elections 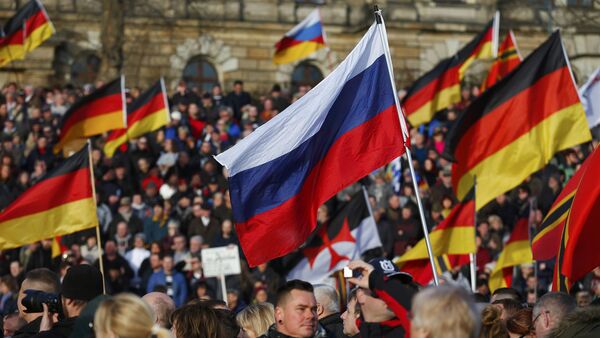 More than 500,000 Russian citizens are registered with Russian consulates in Germany but not all of them are expected to take part in parliamentary elections on Sunday.

BERLIN (Sputnik) – "A total of 512,292 people are registered with the Russian consulate but it is impossible to forecast how many of them will really come to elections. In addition, people, who are not registered, can come to vote – for example, students and tourists," a source told RIA Novosti.

Duma Elections: The Important But Overlooked Vote Occurring in Russia This Fall
The elections into lower house of the Russian parliament, the State Duma, will take place at 8 a.m. [06:00 GMT] – 8 p.m. [18:00 GMT] on Sunday. Russian citizens will be able to vote in the Russian embassy in Berlin, as well as in consulates general in Bonn, Hamburg, Leipzig, Munich and Frankfurt.

The total number of polling stations will be 16 with two of them in the embassy, six – in Bonn, three in Hamburg, one in Leipzig, two in Munich and two in Frankfurt.

During previous elections, tourists needed absentee certificates to vote, now they should have only a Russian or traveling passport.

The source noted it was difficult to forecast how many voters would come to vote. About 54,000 people are registered in Berlin, Brandenburg, Mecklenburg-Vorpommern and Saxony but the embassy believes that only about 3,000 – 4,000 people will take part in the elections. About 5,500 Russian citizens voted in Berlin during the 2012 presidential elections while the total number of people voted in Germany was around 21,000.

The source said that special security measures would be taken on the voting day.

"All security system of the embassy is mobilized, we will work in cooperation with the Berlin police – because Duma elections and Berlin parliament’s elections will be carried out on the same day," the source said.