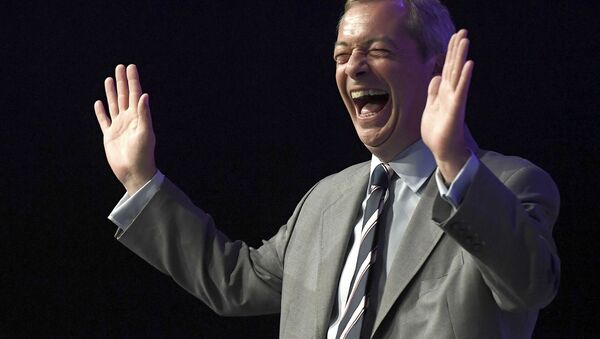 At the UKIP conference on Friday, Nigel Farage has stepped down as the party's leader. In a triumphant farewell, Farage claimed his legacy "has caused an earthquake in British politics", forever changing the face of Britain.

In the seaside resort of Bournemouth, on the south coast of England, members of the UK Independence Party met to pay tribute to their divisive leader of nearly a decade, Nigel Farage.

He was met with adulatory crowds, and a very British salute of three cheers.

Thank you all for your support. Together we have changed history. pic.twitter.com/tvZ1HgshU7

For once not just a naval-gazing, crowd pleasing statement by a politician, it's true that Mr. Farage has indeed been remarkably influential in British politics.

.@Nigel_Farage: "I guess it's been my life work to get this party to where it is. I've done my bit," #UKIPConf

Political commentators suggest that the threat of more right-wing Conservative supporters defecting to UKIP, particularly drawn by hardline stances on immigration, was instrumental in pushing former Prime Minister David Cameron to announce the EU referendum in the first place.

Indeed, with an almost flashy love of theatrical soundbites and grandstanding moments, Farage often hit the headlines, despite his party having relatively small electoral success at the polls.

Most notable was a derogatory soliloquy against then President of the EU Council, Herman Van Rumpuy, performed in the heart of the European Parliament in Strasbourg in 2010.

Van Rumpuy was, Farage exclaimed with melodramatic flair, a man with "the charisma of a damp rag, and the appearance of a low-grade bank clerk."

He was to some in Britain, an individual 'character' speaking about politics, as opposed to a more traditional party leader.

It was this personal touch that gained him followers, fed up with the perception of an overly-polished political elite out of touch with 'ordinary' people. 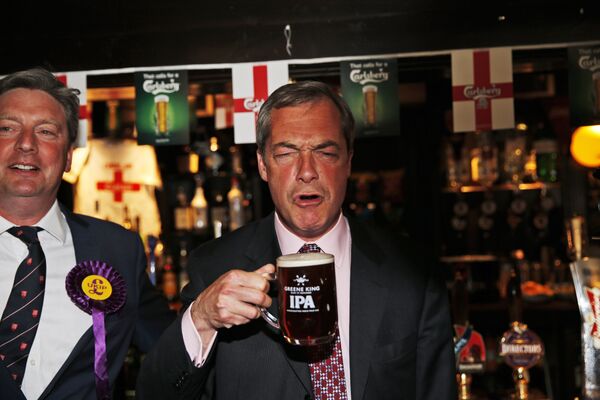 However, Farage was also plagued with accusations that his views encouraged racism.

One of the most defining moments of the divisive Brexit referendum campaign, was when Farage unveiled a giant poster depicting a long line of dark-coloured refugees and migrants with the words "BREAKING POINT" emblazoned above them.

Even those on the same side of the referendum debate, distanced themselves from what many saw as an overtly bigoted message.

Vote Leave campaign leader and then Justice Secretary Michael Gove, admitted that he "shuddered" when he first saw the poster, while former Chancellor George Osborne said it had "echoes" of 1930s' Nazi literature. The poster was even reported to police as an attempt to incite racial hatred.

It gained intense notoriety as it was unveiled on the same day that Labour politician Jo Cox was murdered by a man witnesses claim shouted "Britain first!" as he shot and stabbed her.

Farage was unswayed, insisting that the image showed "the truth" of the migrant crisis and that "being part of a European Union isn't working".

However, despite the cheers, the elephant in the room was UKIP's future: where is it possible for UKIP to go now? Is there a room in British politics for a pro-Brexit campaigning party, now Brexit has been achieved.

.@Nigel_Farage: "We weren't afraid to talk about immigration — nobody else would touch the subject," #UKIPConf

One woman who thinks that the answer is a clear 'no', is none other than one of Nigel Farage's closest aides, Alexandra Phillips.

In an embarrassing example of jumping ship, Phillips has chosen the same day as the UKIP conference to announce that she has defected to the Conservative Party.

Phillips led UKIP's media operation for three years, but says that the party has now been rendered obsolete, and has "disintegrated".

She claimed that Conservative Prime Minister Theresa May has delivered on all key elements of UKIP's 2015 election manifesto "within a matter of months".

"I think ideologically the Tories are doing the UKIP dance now," she said, highlighting policy standpoints on Brexit, immigration, grammar schools and fracking.

However, despite the discomfort of such a senior defection, perhaps one of Farage's political legacies is that his views once considered on the fringe of what was publicly acceptable to discuss, have become more mainstream.

In 2006, David Cameron dismissed UKIP as a bunch of "fruitcakes, loonies and closet racists". Ten year's later, a campaign partly instigated by UKIP's leader, had toppled him from being a world leader. 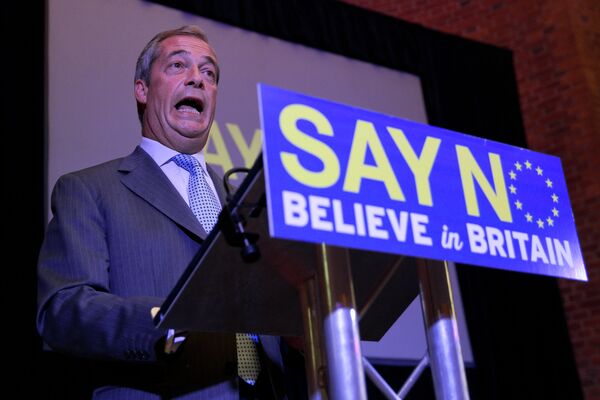 UK Independence Party (UKIP) leader Nigel Farage speaks at a press conference in London on July 30, 2015, where he set out the party's vision for a 'No' vote in an referendum on EU membership that Britain's Prime Minister David Cameron has promised to hold before the end of 2017.
© AFP 2022 / Justin Tallis

In his farewell speech, Farage directly touched on how his party's image has changed:

"We weren't afraid to talk about immigration — nobody else would touch the subject. We won the European Elections in 2014, and since then have changed the face of British history."

Despite stepping down from British politics, Farage couldn't resist firing a gleeful parting shot across the political establishment's bow.

"I said we'd cause an earthquake in British politics — and we did."

Farage will continue to sit in the European Parliament leading the UKIP group.

So Farage quits as leader but will remain leader of UKIP group in EU parliament. That's quite some backseat driver.

And he has also vowed to travel around Europe helping other anti-EU movements.

Indeed, his critics shouldn't count him out completely, as with a smile Farage claimed that he is happy to be unconstrained by the responsibilities of being party leader.

.@Nigel_Farage: "From now on, I'm really going to speak my mind!" #UKIPConf

What that means exactly is anyone's guess. What does seem likely, is that Mr. Farage will not allow himself to slip into obscurity.

MEP Diane James has been elected to replace Nigel Farage as UKIP leader at the party's annual conference in Bournemouth on Friday.