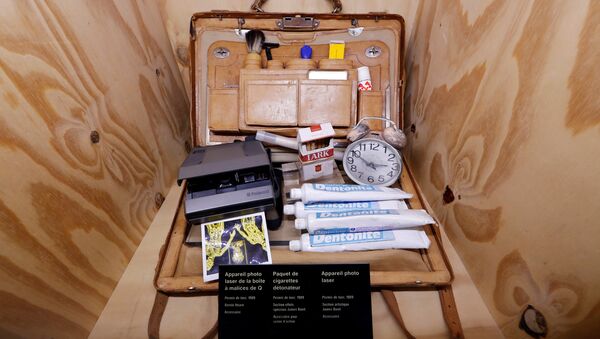 © REUTERS / Benoit Tessier
Subscribe
International
India
Africa
The 'Call a Spy' hotline can be set up anywhere with a stable internet connection, Ariel Fischer, one of the creators of the project, told Sputnik Deutschland.

US Spy Chief: Russians Do It ‘All the Time,’ But Won’t Blame Moscow in DNC Hack
If you ever wanted to chat to a spy, now's your chance – a group of German artists have set up the "Call a Spy" hotline.

Ariel Fischer from the art group "Peng!" told Sputnik Deutschland that they can set up the hotline anywhere with a stable internet connection. It looks like an ordinary telephone, but is connected to the "Call a Spy" server.

The server contains a database of spy's numbers, and randomly selects one to connect the caller with. Calls are routed through a private network that masks the original source of the call.

Fischer said that despite the secrecy of intelligence work, the majority of the numbers were freely available on the internet, and come from a range of different countries.

"You can find most of the numbers on the internet, some of them are from professional organizations, and some of them became known as the result of intelligence leaks. You just have to search," Fischer explained.

German MP Tells Sputnik He's Furious Over Turkish Spy Ring Allegations
The group was motivated by a desire to show that "these agents are also people, and not characters in a Hollywood film who sit in dark rooms and control everything."

"At the end of the day, these people are given tasks by our government, they are supposed to protect us and not spy on us."

"The conversations vary from short prank calls to very serious talks about moral questions, work or the intelligence agent's personal view on a particular issue. These people usually consider themselves to be great patriots who carry out their work with conviction. Of course, they have something to say and the media today criticizes them a lot. We also have something to say but there is always the problem of how to ask the question and build a bridge so that that person will talk to you. It's not easy, but it's realistic," the artist explained.

Peng! has developed three different ways of calling a spy. The first is a phone booth, the second is a call center which provides people with training about how to best communicate with the spies, and the third is a live show in which contestants compete to see who can communicate best with their spy.

Fischer said that the reaction of the spies is particularly interesting, given their training.

"Of course, these people aren't used to being called on these numbers. However, they have had special training and it is quite exciting to observe how they react, how suspicious they are, what questions they ask, how they automatically start digging for information and how they professionally avoid answering questions."

New Snowden Leak: NSA’s 'Collect All the Signals' Spy Strategy Started in the UK
While some spies reacted positively to calls, some intelligence agencies were less enthusiastic, and Fischer suspects some agents have decided to take further action.

"There have been some different (counter) measures. It happened that our connection with the UK just stopped working. We have had some different technical problems associated with testing the connection. We can't be sure, but there were also some suspicious activities. We are always trying to find more technical solutions, but today it is working," he said.