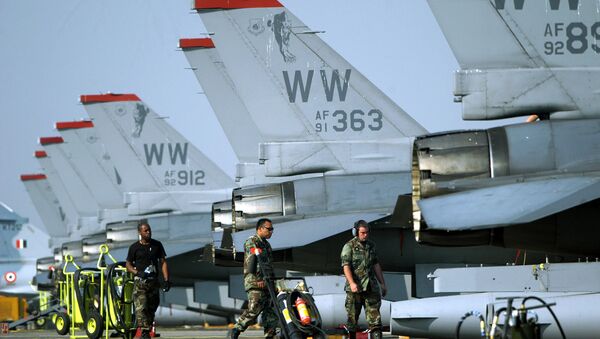 Each branch of the US military is not prepared to meet the contingencies set out in the Department of Defense’s strategic guidance for full-spectrum conflict, US service chiefs said at a Senate hearing on Thursday.

WASHINGTON  (Sputnik) — US Air Force Chief of Staff General David Goldfein said that the new requirements are difficult of accomplishment for the US military.

US Preparing Electronic Warfare for 'Force-on-Force Conflict in Europe'
US Army Chief, General Mark Milley affirmed that his service is at "high risk" for the ability to accomplish goals "on time" and "at an acceptable level of cost expressed in terms of casualties to troops."

If forced to combat a near-peer rival and ward off another adversary, the United States "will win, but it is going to take a lot longer than we would like, and it’s going to cost a lot more," Chief of Naval Operations Adm. John Richardson emphasized.

The challenges of potentially facing a rival like Russia or China is complicated by the fact that the US military has been shaped by 15 years of counter-insurgency operations, and has put off investments in high-end capabilities and needed modernization, Marines Corps Commandant General Robert Neller explained.

"While we’ve been doing this, effectively, our potential adversaries have recapitalized from the ground up," Neller said, also noting that the high-risk environment US armed forces would face in a conflict against a near-peer rival and an additional adversary.

Since 2013, the US military has been hit with substantial budget cuts at a time of increased demand for counterterrorism activities in the Middle East and a renewed deterrent posture in the Asia Pacific and Europe.