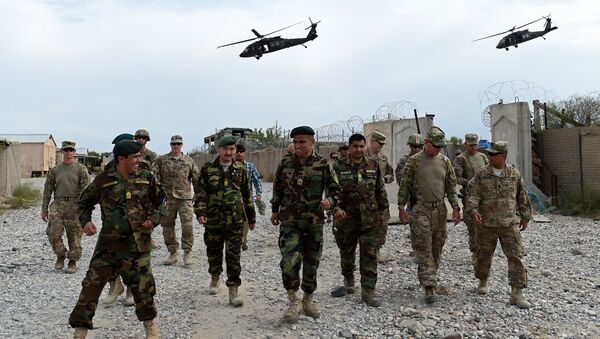 The United States used 13 years of its anti-terror Operation Enduring Freedom in Afghanistan as a pretext to expand its influence in Central Asia, former Kyrgyz President Askar Akayev said on Thursday.

MOSCOW (Sputnik) — The US-led coalition launched Operation Enduring Freedom in Afghanistan in October 2001 in a bid to destroy al-Qaeda leader Osama bin Laden who was behind 9/11 terror attacks.

"It turned out that they came there for long, that their aims were not limited to extinction of international terrorists in Afghanistan. Their main goal was to gain foothold in Central Asia in a bid to solve their geopolitical problems," Akayev told RIA Novosti.

He added that the operation in Afghanistan enabled Washington to cut China from potential routes of oil deliveries from the Persian Gulf.

"One of the pipelines could connect it [China] through Afghanistan and Iran with the [Persian] Gulf. The United States did not want China to get hold of such simple, direct way to fuel," Akayev said.

US-Central Asian Foreign Ministers' Meeting: What's the US Up to in the Region?
The US-led anti-terror mission aimed to make terrorism in Central Asia a political tool rather than to uproot it, Akayev said, blaming Washington for the Tulip Revolution in Kyrgyzstan.

Akayev was Kyrgyz president in 1990-2005. He was ousted from power in 2005 by the Tulip Revolution and currently resides in Russia, where he is engaged in scientific work.