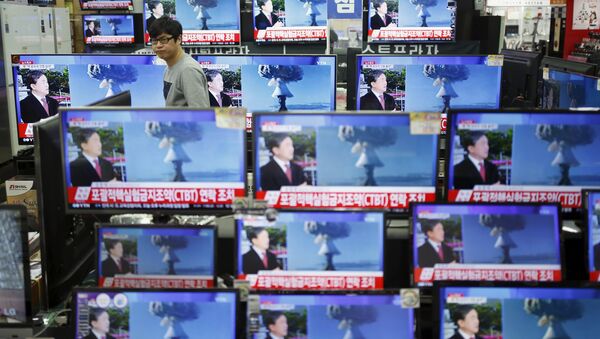 © REUTERS / Kim Hong-Ji
Subscribe
International
India
Africa
The P5 nations are dedicated to early adoption of the Comprehensive Nuclear-Test-Ban Treaty (CTBT) and urge other states to ratify the agreement, the United States, Russia, China, France and the United Kingdom said in a joint statement.

WASHINGTON (Sputnik) — According to the statement released on Thursday, the P5 states "pledge to strive for the Treaty’s early ratification and prompt entry into force and urge all states that have not done so to sign and ratify the treaty."

Additionally, the officials said they are working closely with the Preparatory Commission to develop the Treaty’s verification regime, including monitoring and inspections mechanisms.

US Senators Warn Obama Against Bypassing Congress on UN Nuclear Test Ban Treaty
Furthermore, the nations reaffirmed their own moratoria on nuclear explosions or test explosions pending the CTBT's entry into force.

Earlier on Thursday, US Under Secretary for Arms Control and International Security Rose Gottemoeller said that the P5 officials will convene their first formal nuclear doctrines meeting in New York on October 6.

The P5 noted that 183 nations have signed the treaty and 166 have ratified it, including several nuclear weapons states.