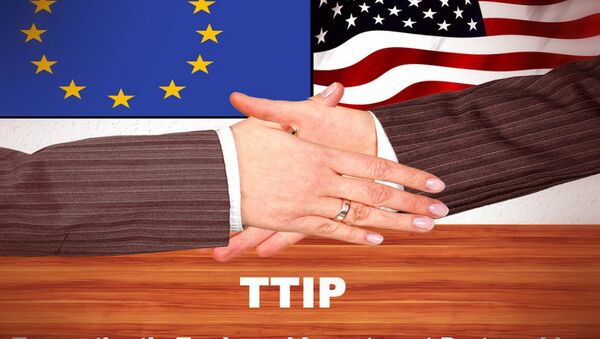 The next round of talks on the Transatlantic Trade and Investment Partnership (TTIP) deal will be held the first week of October in New York, US Trade Representative Michael Froman and EU Trade Commissioner Cecilia Malmstrom announced in a joint statement after a meeting in Brussels.

EU-US TTIP Agreement Talks Unlikely to Progress Before June 2017
WASHINGTON (Sputnik) — The statement said that the parties "reviewed the substantial progress being made [on TTIP] and discussed next steps for moving forward."

"We have directed our teams to make as much progress as possible during the next round, scheduled for the week of October 3 in New York."

On Monday, a diplomatic source told RIA Novosti that substantial progress could not be expected before the end of June 2017 on efforts to finalize the TTIP agreement, which seeks to establish a free trade zone between the European Union and the United States.

Last month, German Vice-Chancellor Sigmar Gabriel said the negotiations with US officials on TTIP had "de facto failed" because Europeans do not want to subject themselves to American demands.

The detailed content of the agreement has been concealed from the public but, according to leaks, TTIP will affect food safety laws, environmental legislation, banking regulations and open the European Union to genetically-modified crops.