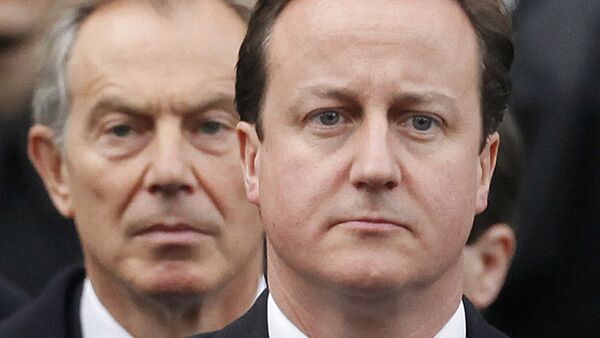 John Wight
All materials
The news that a UK foreign affairs committee has apportioned responsibility for the destruction or Libya and its transformation from a functioning into a failed state to former PM David Cameron, merely confirms the verdict reached by Irish revolutionary leader James Connolly over a century ago when it comes to the British ruling class.

"Their crimes," Connolly said, "would shame all the devils in hell."

Of the numerous examples of western military intervention in recent times, none has been more grievous or disastrous than NATO's 2011 intervention in Libya, which as mentioned only helped turn the country into a failed state.

Unleashed under the auspices of UN Security Council Resolution 1973 — a UN mandate abused to effect the toppling of the Gaddafi-led government in Tripoli, despite its official and stated objective of "protecting civilians" — NATO's intervention in the form of airstrikes did not result in the democratic society, so gushingly anticipated by its supporters. Instead it ushered in crisis and chaos, as Libyan society descended into an abyss of tribal, sectarian, and brutal internecine conflict, allowing Daesh (also known as ISIL) to gain a foothold in the country.

Compounding the mendacity fueling regime change in Libya in 2011 was the fact that under Gaddafi, Libya by then was a country open for business with the West and had been for the best part of a decade. If Muammar Gaddafi was the "tyrant" the US claimed he was upon his death at the hands of a mob, what was he when President Obama was shaking hands with him at the G8 Summit in Italy in 2009, to which the Libyan leader had been invited as head of the African Union?

As Oscar Wilde said, "A true friend stabs you in the front."

Another grievous consequence of the chaos in Libya has been a refugee crisis of biblical dimension. Over the past five years tens of thousands of Libyans, desperate to escape the hell the country has become, have risked a perilous voyage across the Mediterranean in barely seaworthy vessels. Thousands of them have drowned in the attempt with more sure to follow. These are the desperate human beings whom David Cameron once infamously described as a "swarm."

The reality of regime change in Libya has proved a world away from the fantasy embodied in the fatuous proclamation made by Cameron during a visit to Benghazi along with his then French counterpart Nicolas Sarkozy in 2011. Flush with the triumphalism of a man cocooned from the consequences of his decisions, the British prime minister took to a microphone to congratulate the Libyan people for "choosing democracy." 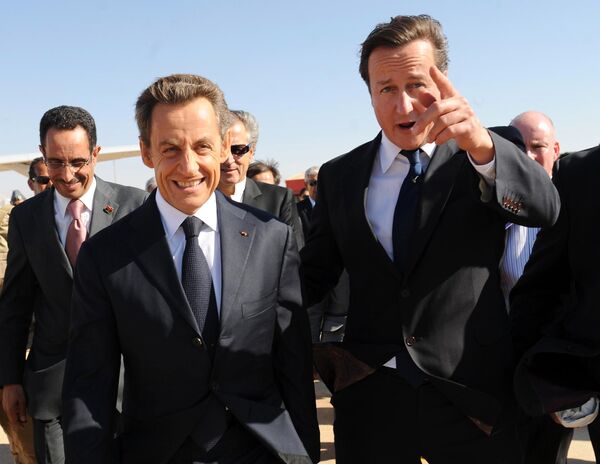 Then British Prime Minister David Cameron (R) gestures next to then French President Nicholas Sarkozy as they arrive at Benghazi airport on September 15, 2011.
© AFP 2022 / Stefan Rousseau

As if this wasn't bad enough, in 2015 US Special Envoy to Libya, Jonathan Winer, had the astounding temerity to claim in an article on the US State Department's official blog that the overthrow of Gaddafi was a "moment of pride for Libyans and those who supported them."

By "those who supported them," Mr Winer was referring to the US and its European allies, responsible for the previously mentioned NATO intervention without which the rebels would not have succeeded given that their revolt did not have the mass support of Libyans; this,despite the myth of it being a popular revolt, deployed in order to support the toppling of the existing government.

When Gaddafi claimed that the revolt in Benghazi in the east of the country was being led by al-Qaeda, governments and opinion formers in the West scoffed, preferring to regard the rebels as democrats. Of course there were people among the rebels fighting to bring about democratic change, but they were by no means the driving force of the uprising.

In June 2011, for example, a few months before Muammar Gaddafi was murdered, the American conservative magazine, National Review, carried a story on its website citing a report compiled by two French think tanks. It revealed that "jihadists have played a predominant role in the eastern Libyan rebellion against the rule of Muammar Gaddafi, and that 'true democrats' represent only a minority in the rebellion."

Victims of the West

The simple truth is that Libya and its people were victims of the West's crude attempt to hijack the momentum of the Arab Spring at the very point at which it came to the end of its reach.

The speed of its spread and mass support in Tunisia and Egypt, where it succeeded in toppling two pro-western dictators in the shape of Ben Ali and Hosni Mubarak, caught Washington and its allies by surprise.

Libya is where they decided to try and place themselves at its head, motivated not by the desire to help effect democratic change in the country but to ensure that the extensive and lucrative oil exploration contracts and economic ties forged with the Gaddafi government were protected and upheld upon his demise. This was their motivation and a failed state is the result.

When it comes to David Cameron's role in this disaster, in many ways he is worthy of even more opprobrium than his predecessor, Tony Blair, has faced over Iraq. Cameron, after all, had the experience of Iraq's destruction to draw upon when it came to Libya yet still ploughed ahead regardless.

The burning question a world interested in justice has long demanded an answer to is when are these so-called leaders and democrats, members of a ruling class dripping in the blood of millions, ever going to be held accountable for the vast human suffering they have and continue to sow across the world?