Snowden Says Did Not Pick Russia as ‘Safe Heaven’ Destination 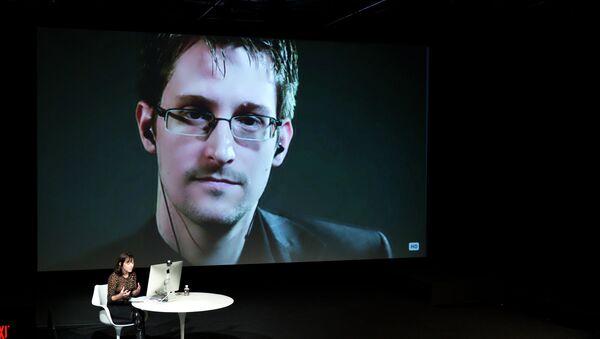 US National Security Agency (NSA) whistleblower Edward Snowden said that after departing the United States he could still use his US passport, but was "frozen in transit" by the State Department.

US Rights Group ACLU Calls on Obama to Pardon Edward Snowden
WASHINGTON (Sputnik) — US National Security Agency (NSA) whistleblower Edward Snowden said on Wednesday he did not plan to seek political asylum in Russia, but was forced to do so as a result of US government actions against him.

"When it comes to where I am, how safe I am, the ultimate decision about that has not been mine, but the State Department's," Snowden said at "Pardon Snowden" campaign luncheon in New York. "I did not pick a particular destination, I was trying to go to Lebanon."

In 2014, Russia provided Snowden a three-year residence permit after he leaked classified documents pertaining to US government’s mass surveillance programs of American citizens.

Peskov Declines to Judge Snowden's Actions, Stresses Impact of His Revelations
Snowden noted that after departing the United States he could still use his US passport, but was "frozen in transit" by the State Department.

"There was a rumor that my passport was canceled before I departed Hong Kong — that's not true. [Chinese] officials can prove that," Snowden pointed out.

Earlier on Tuesday, Snowden's attorney in Russia Anatoly Kucherena urged US President Barack Obama to pardon the NSA whistleblower and prove the worth of his Nobel Peace Prize Award.