Stavridis: US Should Try to Resolve China, Iran Disputes Via Economic Engagement 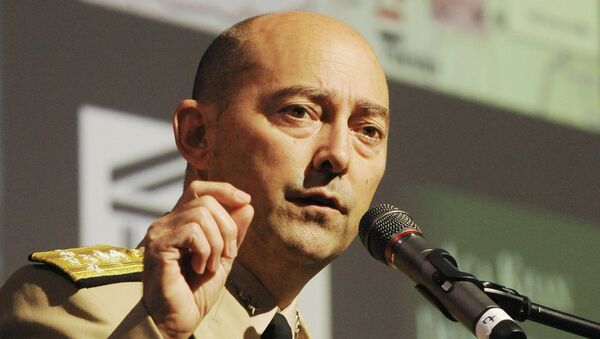 © AP Photo / Alik Keplicz
Subscribe
International
India
Africa
The best hope of avoiding armed conflict between the United States and China in the South China Sea, and with Iran in the Persian Gulf, is through economic engagement, says NATO ex-commander James Stavridis.

US Intelligence Lacks Experts Unsure How to Reach ‘Equilibrium’ With Russia
WASHINGTON (Sputnik) — The best hope of avoiding armed conflict between the United States and China in the South China Sea, and with Iran in the Persian Gulf, is through economic engagement, US Naval Institute chairman and former NATO Supreme Allied Commander James Stavridis told Sputnik.

"Over time, the interconnection of the [US and Chinese] economies will hopefully prevent actual combat from taking place," Stavridis, a retired US Navy admiral, said.

The US Navy’s operations chief, Admiral John Richardson, traveled to China in July to meet with his counterpart in the naval arm of the People’s Liberation Army, Admiral Wu Shengli.

"China and the United States have a largely productive diplomatic and economic relationship, but the Chinese activities in the South China Sea, including building artificial islands and pressuring neighbors about ownership of the water space, creates tensions not only in East Asia but between the US and China," Stavridis said. "There is also competition in cyberspace."

In August, speedboats operated by Iran’s Revolutionary Guard Navy harassed US warships, and on Saturday the Iranian Air Defense Force threatened to shoot down a US Navy P-8 Poseidon and an EP-3 Aries surveillance aircraft that were patrolling 13 miles off the Iranian coast.

"The best hope of solving the Iranian problems are not military but through economic engagement. Those markets will open up," said Stavridis, who is the dean of Tufts University’s Fletcher School of Law and Diplomacy and a senior fellow at the Johns Hopkins University Applied Physics Laboratory.

He is the only US Navy officer to have led the US Southern Command and the US European Command, and to serve as supreme allied commander, which is NATO’s top military post.