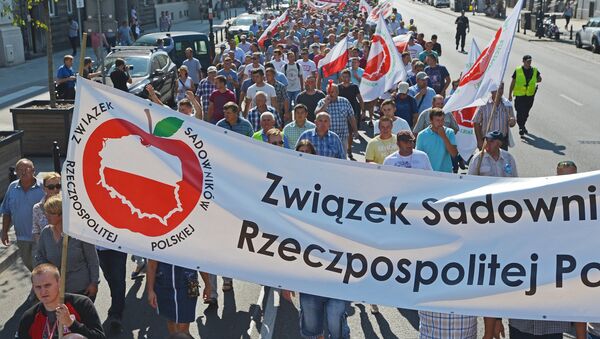 © Sputnik / Alexey Vitvitsky
/
Go to the photo bank
Subscribe
If Warsaw fails to normalize economic ties with Moscow in the near future, Polish farmers will lose their Russian counterparts for good, Witold Piekarnik, Vice-President and Treasurer of the Association of Polish Fruit Growers, told Sputnik.

Silver Lining: Nexit May Spell End to Anti-Russian Sanctions
In an interview with Sputnik, Witold Piekarnik, Vice-President and Treasurer of the Association of Polish Fruit Growers, called for the normalization of Warsaw-Moscow economic relations, which he said could support Polish farmers' drive to stay in the Russian market.

The interview came after the Association of Polish Fruit Growers held a rally in Warsaw to protest the anti-Russian sanctions, which Piekarnik said rode roughshod over interests of Polish farmers.

"It is time to put an end to these senseless actions, which have tarnished the economic relations between the two countries. We mean that the Polish government should hold direct talks, like our Minister of Agriculture, who sat down with his Russian counterpart," Piekarnik said.

Another option is to do what the Polish group's partners in the European Union have done: "compel their governments to take measures aimed at the rejection of the embargo practices," he said, adding that politics should not prevail over the economy. 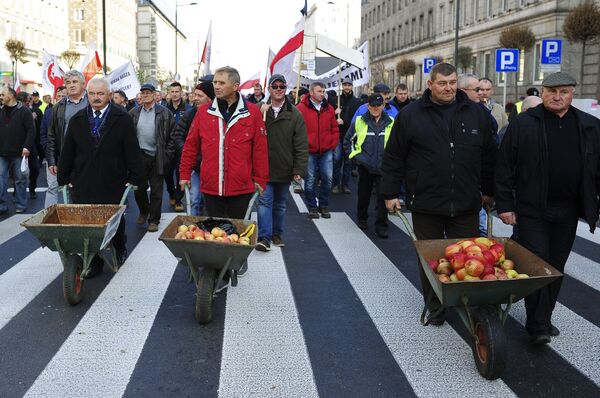 Hundreds of Polish farmers and horticulturists staged a march in Warsaw in protest against Russia's ban on the import of their fruit and vegetables. File photo
© Sputnik / Filip Klimaszewski
/
Go to the photo bank

"Yesterday we told our minister: 'Mr. Minister, if Warsaw intended to harm Russia, then why do we continue to buy Russian gas and oil? If we purchase it because of the relevant agreement, let's do the same in the agriculture sector'," Piekarnik said.

Poland Interested in Good Ties With Russia Despite Supporting Sanctions
He added that Polish farmers are dissatisfied about the fact that while Ukraine's grain supplies are currently being shipped to Poland, Kiev won't import either Polish vegetables or Polish meat, which Piekarnik said results in Polish farmers suffering significant losses.

Touting the Association of Polish Fruit Growers as an "important" non-governmental organization, Piekarnik announced its plans to meet the producers of grain, beef, pork and other products so as to try to reach a consensus.

"Our goal is to return to previous relations with our Eastern partner. With speculations on Poland's economic cooperation with China gathering strength, we continue to insist that most of our products should be sold on the market we earlier entered," he said in an apparent reference to Russia.

He warned that manufacturers from China and South America may force Polish farmers out of the Russian market if the steps are not made in the direction of the normalization of Russian-Polish relations.

"We cannot supply the volume we now produce to other markets. We meet daily at the Russian Embassy to discuss the issue, and we see the Russian side's good will. In other words, sometimes both partners need to step back and concentrate on the economy, not politics. Our only desire is to normalize bilateral economic relations," he said.

The United States, the European Union and some of their allies have introduced several rounds of anti-Russia sanctions since Crimea reunified with Russia in 2014; they have accused Moscow of meddling in an internal Ukrainian conflict.

Two Years On: How Russia's Agricultural Sector Reaps the Benefits of Sanctions
Russia has repeatedly refuted the accusations and warned that the sanctions are counterproductive and undermine regional and global stability.

Moscow retaliated by launching its own sanctions on August 7, 2014. Russia imposed restrictions on the import of beef, chicken, pork, dairy products, fish, nuts, fruits and vegetables from the countries that supported the anti-Russian sanctions.

In July 2016, the EU Council prolonged the anti-Russian sanctions until January 31 2017, and Russia responded by extending its counter-sanctions until December 31, 2017.