Kiev Could Get Total of $2.3 Billion of IMF Aid in Current Year 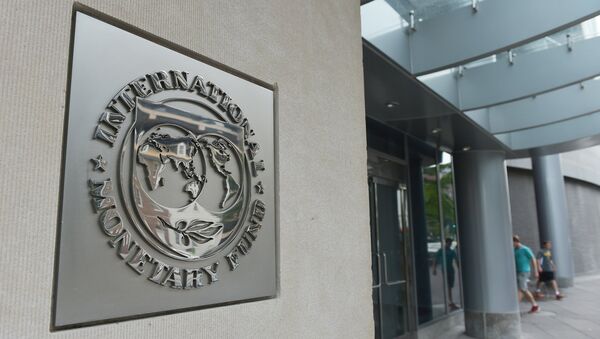 © AFP 2021 / MANDEL NGAN
Subscribe
The International Monetary Fund (IMF) could allocate a total of $2.3 billion to Ukraine by the end of 2016, an IMF source told RIA Novosti.

Ukraine Opposition Demands Disclosure of Conditions for IMF Tranche
WASHINGTON (Sputnik) – The total amount of the predicted IMF disbursement of "up to $2.3 billion" would include the $1 billion of aid that the fund agreed to give to Ukraine on Wednesday, the source said.

The IMF executive board agreed to provide Kiev with a $1-billion tranche on Wednesday, the fund said in a statement.

According to a statement posted on the official website of the president of Ukraine, the IMF decision opens the way for the allocation of $1 billion of assistance from the United States and 600 million euros (over $675 million at the current exchange rate) more from the European Union.

Ukraine heavily relies on foreign aid to support its economy and to pay its debts amid an ongoing armed conflict with independence supporters in the country's southeast.

On March 11, 2015 the IMF approved a four-year program of financial aid to Ukraine, which stipulates a $17.5 billion loan over the next four years. The bailout package for Ukraine requires that Kiev implement a number of political reforms.

In June, Ukrainian Prime Minister Volodymyr Groysman said that the country expects to receive a total of $1.7 billion from the IMF in 2016.

Groysman welcomed the Wednesday IMF decision on the allocation of more aid to Kiev, saying on Facebook that it signifies that trust in Ukraine is being restored.