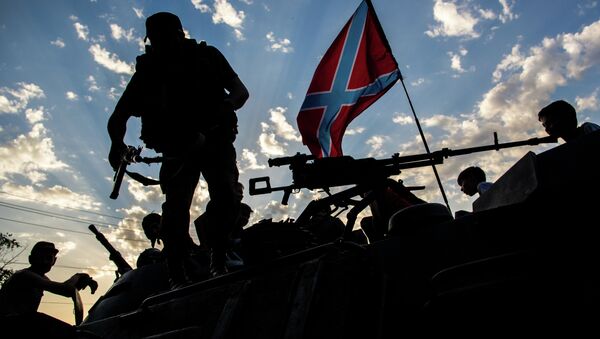 © Sputnik / Andrei Stenin
/
Go to the photo bank
Subscribe
A new regime of silence has come into force in Ukraine’s southeast (Donbas), where Kiev forces are conducting a military operation against independence supporters, according to self-proclaimed Donetsk People’s Republic.

"At 00:00 on September 15 yet another ceasefire came into force. Before that, artillery fire was registered from the direction of the [Ukrainian] security forces on the territory of DPR," a spokesperson of the DPR Defense Ministry said.

Previously, a new ceasefire regime came into force in Donbas on September 1. The ceasefire agreement was reached between Ukraine’s conflicting sides during a Contact Group meeting in August.

The Trilateral Contact Group, which includes representatives from Kiev, Donbas, Russia, and the Organization for Security and Co-operation in Europe (OSCE), hold regular meetings in the Belarusian capital, Minsk, aimed at facilitating a diplomatic resolution of the armed conflict in Ukraine’s southeast.