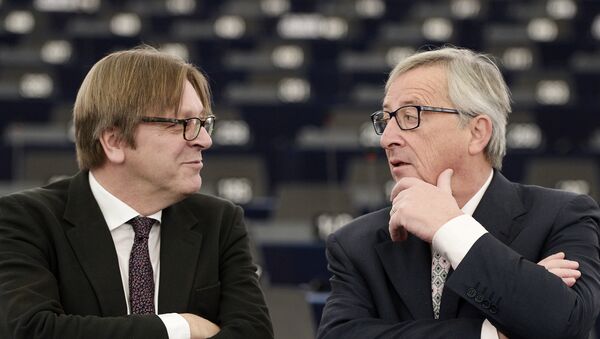 The former Prime Minister of Belgium, Guy Verhofstadt, who now leads the Liberal Democrat bloc in the European Parliament, is in talks with European Commission President Jean-Claude Juncker over the Brexit negotiations, pointing a possible new path for the EU.

'Get on With It' - Tusk Presses Theresa May to Start Brexit ASAP
The negotiations between London and Brussels over Brexit — the first time ever a member state has pulled out of the EU — are complicated because they are being led by no fewer than five people. Verhofstadt has been appointed the parliament's lead negotiator, with his own agenda to follow.

Juncker heads the Commission and — as such — will have to implement the fine detail of the talks. Meanwhile, Donald Tusk is president of the European Council, which is nominally the highest tier of the EU. The President of the Parliament, Martin Schulz, will also be in the mix, as will Robert Fico, the Prime Minister of Slovakia, which holds the rotating presidency.

Honour to be appointed as lead #Brexit negotiator for @Europarl_EN, which will play central role Art 50 deal + any future EU-UK agreements.

​But it is Verhofstadt's appointment that is perhaps the most guiling. He is a federalist, but not anti-British and he has called for reforms to the EU in the wake of Brexit, on top of the migrant and Eurozone crises.

However, he is against the UK remaining in the single market for less money that it is paying now with a seven to ten-year emergency break on EU-migration, which UK Prime Minister Theresa May has proposed.

"A deal with these conditions would be unthinkable. It would allow the UK to expand its already very favorable position: keeping the best parts and ridding itself of the obligations that come with it. EU Governments would be mad to agree to such a deal and I can tell you: the European Parliament will never agree to a deal that 'de facto' ends the free movement of people for a decade, while giving away an extra rebate in exchange for all the advantages of the internal market," he said.

​"What would stop other countries from asking the same exceptional status? Do we really want euroskeptics elsewhere in Europe to invoke the British example of 'having their cake and eating it'? Everyone can see that this position is irresponsible because it's not sustainable in the long run.

'Club Med' Mini-Summit Exposes North-South Divide in Europe
Verhofstadt has already criticized the EU for allowing countries — and the UK in particular — to enjoy "Europe a la Carte" and is proposing a two-tier EU, with a core of countries — probably the Eurozone — having deeper integration, while other members would enjoy associate status within the free trade area.

Whether Verhofstadt can negotiate such a deal for Britain in a reformed EU, while Juncker is calling for a clean break for Britain and Tusk, Fico and Schulz all have their own agendas, remains to be seen. Yet his may prove the most pragmatic answer against a backdrop of disagreements over an immigration policy and fiscal rules within the Eurozone.