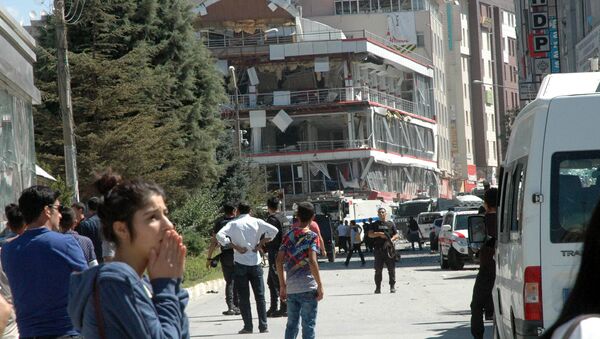 An explosion has hit the Turkish city of Van on Monday.

The car bombing occurred some 650 feet from the provincial administration, according to the DNA news service. The site is also located near a local ruling Justice and Development Party (AKP) office. The blast left 48 people wounded but killed no one, according to local officials.

"At 10:50 [07:50 GMT] as a result of a parked vehicle explosion, 48 people were injured, including 46 civilians and two police officers. Two are in critical condition," the provincial administration said in a statement published on its website.

A number of ambulances and firefighter crews have been dispatched to the scene.

The city is one of several southeastern municipalities where the Turkish armed forces clash with the Kurdistan Workers’ Party (PKK) insurgents.

It was initially reported that the explosion 650 feet from a provincial administrative building and a local ruling party office injured 11, then 19 people.