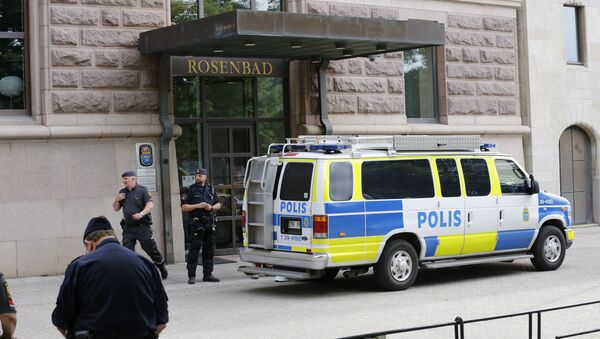 © AFP 2021 / Christine Olsson / TT NEWS AGENCY
Subscribe
The Swedish police force, which has experienced a deep crisis exacerbated by underfunding and the raging migrant crisis, is plagued by severe staffing problems. If personnel loss persists at the current rate, Sweden could lose up to a fifth of its police force, which may render the Nordic country helpless against organized crime and terrorism.

"So far this year, almost three police officers per day have left the profession. At this rate, a fifth of the force will be gone by 2020. To stop the serious crisis, there must be a real investment in police and higher wages for the hard-pressed police corps," Nitz told Swedish trade newspaper Proffs.

Last week, Swedish Police chief Dan Eliasson unveiled measures on how he intends to improve the police. Among other things, Eliasson wants to hire 600 more civilian police, extend police training and a thorough shake-up of the whole police force, which came under fire for being unable to stop the crime surge, including gangland violence, sexual assaults and vehicular vandalism. The crisis was acknowledged by numerous officials and politicians, with the exception of Prime Minister Stefan Löfven, who vehemently denied it, triggering further criticism. With a police force of under 20,000 and constantly shrinking, Sweden is estimated to become unable to deal with the issues of terrorism, organized crime and the migrant crisis.

Incendiary Measures: Swedish Vigilantes Take on Car Arson in 'No-Go' Ghettos
The proposed measures were severely criticized by Lena Nitz, who advocated more strenuous efforts to improve the employment conditions for the active police officers. According to Nitz, the focus must be on relieving the stress burden from the heavily overloaded police.

"Police officers spend too much time standing at the copier, guarding the jail, siting in reception and doing too much administrative work. This is unreasonable in the current situation, in which more police officers are needed out in the streets and for crime investigation," Nitz said, criticizing Eliasson for "showing too little interest in practical cooperation."

Earlier this year, Eliasson came under fire for failing to prevent the outbreak of rapes and sexual assaults at Swedish summer festivals. To stop the violence against women, police notoriously handed out bracelets with "Don't paw me" inscriptions. Ironically, many of the rapists were later reported to have been wearing the very same bracelets in a mockery of justice.

Wife for Rent: Domestic Swedish Prostitution Competes With Foreign Traffickers
In August, retired criminal police detective Anders Bergstedt argued that uncontrolled immigration and burgeoning ghettos caused Sweden great problems and expenses that no one could have envisaged. Bergstedt also argued that repeat offenders often walk free because of the government's perennial efforts to save money.

"The problem is that the powers that be cannot be bothered with the current problems, while immigration and exclusion areas with serious crime caused us such great costs and problems great problems and expenses nobody could dream of," Bergstedt said, as quoted by Swedish news outlet Fria Tider.

So-called "exclusion areas," which are in effect ghettos with lawlessness and heavy crime, have been by far the hardest challenge to meet for the Swedish police, who most often are welcomed with stones and clubs in these "no-go zones" with the majority of the population being of immigrant descent.

Ironically, Swedish police were even accused of "institutionalized racism" and "racial profiling" earlier this year in a debate article by Gudrun Schyman and Victoria Kawesa of the Feminist Initiative party.