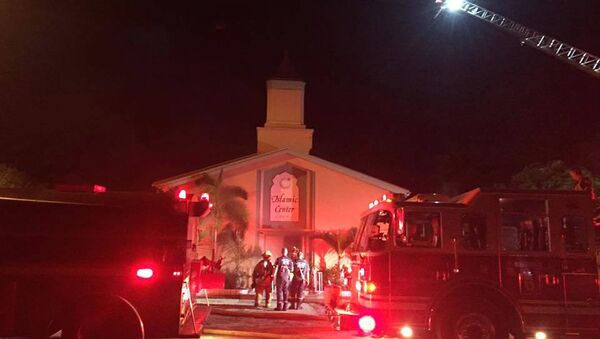 Orlando Shooter Omar Mateen’s Father Appears at Hillary Clinton Rally in Florida
Mateen had attended Friday prayers at the mosque for 13 years, but is not the only terrorist to have worshipped there. The first American suicide bomber in Syria, Moner Mohammad Abu-Salha, was also reportedly a regular.

“A fire at any place of worship is alarming, regardless of the circumstances,” a statement from the St. Lucie County Sheriff’s Office said.

A surveillance video from the mosque captured someone approaching the building before a large flash and the fire begins. The Sheriff’s Office has stated their intention to release the video to seek the public’s help in identifying the perpetrator.

“Video captured at the Fort Pierce Islamic Center shows an individual approached the east side of the building just moments before a flash is seen and the fire starts,” the statement continued. “As soon as we are able, we will release the video of this incident and ask for the public to assist us in identifying the person or persons responsible.”

The incident is being investigated as arson, with assistance from the St. Lucie County Fire District, the Florida State Fire Marshall’s Office, the Bureau of Alcohol, Tobacco and Firearms and the Federal Bureau of Investigations.

Investigators do not have a suspect in custody, and have therefore not released a motive. Monday marked the 15th anniversary of the attacks on the World Trade Center.

The mosque has allegedly been the target of continuous threats since the shooting at the Pulse nightclub where 49 innocent people were killed.