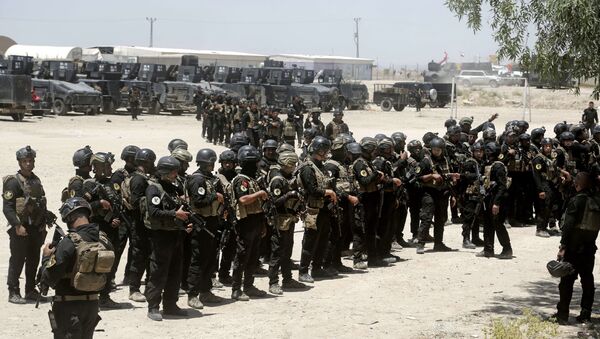 The Iraqi Kurdish militia registered approximately one thousand people, who had fled a territory under the Daesh control in the north of Iraq, and provided them with the necessary aid, local media reported Monday.

MOSCOW (Sputnik) — According to the source, the militia forces provided the people with necessary assistance, in particular, water, food and medicine as there were some down at health among them. He added that the fugitives were likely taken to a camp for displaced persons.

"The Peshmerga forces received at noon today a thousand civilians, who had fled Hawija [southwest of the northern Kirkuk province], which is controlled by Daesh [Arabic acronym for IS]…The majority of those fleeing are women, children and the elderly," a security source, who requested anonymity, told Alsumaria broadcaster.

Campaign Against Daesh Progressing Steadily - UK Defense Secretary
Daesh, a terrorist group outlawed in Russia, occupies vast territories in Iraq and neighboring Syria since 2014. The organization unites Sunni militants who denounce the Shia Muslims, who make up almost 70 percent of the Iraqi population.

Iraqi Kurdistan is located in the north of Iraq and constitutes the country's only autonomous region. The Kurdish Peshmerga militants fight against Daesh on the territory of their autonomy, where the Iraqi Army is forbidden to enter.