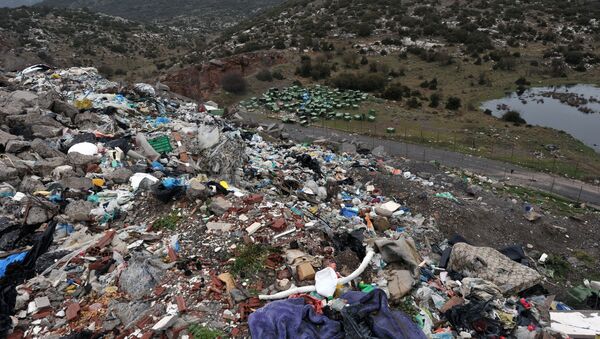 © AFP 2021 / STR
Subscribe
Do you think your life is bad? Think again: nearly one hundred people got injured as they tried to gather spoiled flour from a landfill in Benin.

'Dire and Deteriorating': Fighting Threatens Full-Scale War in South Sudan
According to local media in Benin, an explosion that took lives of at least 8 people and injured dozens, occurred at a landfill (or, rather, a giant trash heap) in Tori, a town about 40 km away Cotonou, a capital of this western-african country.

"Our tally is eight dead, six of them in hospital and two at home, and 87 injured," Robert Tolegbon, the mayor of Tori, told state television.

What might sound as a curiosity at first, in fact reveals a much deeper tragedy.

A local company dumped the spoiled flour at a landfill and set it on fire. However, local people used to gather around the trash dump to collect some of the expired product for themselves before it burns down.

‘It Could Go Global’: Yellow Fever Outbreak Spreads Across Africa
Dry flour is an extremely flammable material, and setting it on fire may cause massive explosions, known as "dust explosions", creating a powerful pressure wave and intense radiant heat. In addition, it can also deplete enclosed spaces of oxygen in a split second which can cause death by asphyxiation. To make matters worse, according to some reports, the flour has been disposed of with the help of gasoline, which caused the blast in the first place.

While poor handling of trash is terrible by itself, a way more severe problem exists in western Africa: the poorest people on the continent have to resort to sifting through others' waste in search of subsistence. It seems that even spoiled flour fits in.

The uncontrolled dumping of trash, which often includes flammable and toxic materials (including electronic equipment and chemicals), combined with downright improper handling of the disposed material and extreme poverty ends yet again in horror.