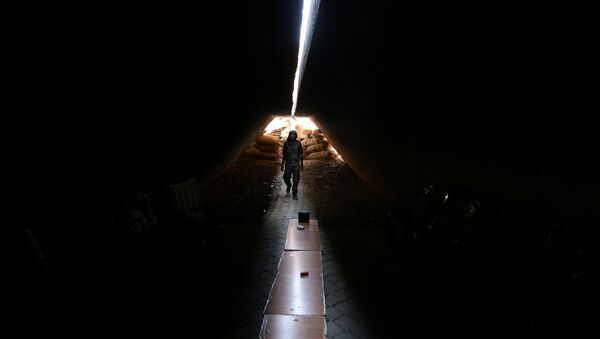 © REUTERS / Rodi Said
Subscribe
The Turkish intervention in Syria might be a very unpleasant development for the US, who backs the Kurdish forces in northern Syria. Could this be the reason for America’s pause on attacking Daesh positions in Raqqa?

This is Why the Turkish Operation in Raqqa Will Serve Russian Interests
Joint operations by the Syrian Army, Russian Aerospace Forces, the US-led coalition and, more recently, Turkey, have pushed the Daesh jihadist group's forces into smaller separated enclaves, scattered across Syria and neighboring Iraq. The group established two de-facto capitals — or strongholds — one in each country: Raqqa in Syria and Mosul in Iraq. Capturing Mosul will deliver Daesh a crushing blow but capturing Raqqa may (not necessarily, but likely) lead to destruction of Daesh as a more or less centralized force (considering, of course, the Al-Qaeda know-how of de-centralization of terror cells).

Recep Tayyip Erdogan, the president of Turkey, who recently joined the fight against the jihadists, has disclosed Barack Obama's intention to advance on Raqqa and confirmed Turkey's readiness to support the offensive.

"Obama wants to do some things jointly concerning Raqqa," Erdogan told journalists during his return flight from G20 summit. "We said this would not be a problem from our perspective. Our soldiers should come together and discuss, then we will do what is necessary."

US Wants Respite, Not Ceasefire in Syria
However, the US command has recently decided to put the advance on Raqqa on hold, opting to take Mosul instead. This has been officially announced by Lt. Gen. Stephen Townsend, the new commander of the US-led coalition against Daesh.

It seems that Turkey and the US failed to find common ground regarding Kurds, who effectively created a core of so-called Syrian Democratic Forces, along with various Arab, Assyrian, Armenian, Turkmen and Circassian militias.

The US backs Kurds to a significant degree, provide the coalition with both material and military support. There are also one to two hundred American "special operators" embedded within Kurdish ranks on the battlefield.

For Turkey, on the other hand, the Kurds are an essential threat, considering the long-time movement of Kurdish separatism within Turkey itself. Should Kurds gain strength in Syria, they will eventually take the fight to the Turkish territory, and Syrian Kurds proved to be quite able fighters with experience from beating Daesh forces back from the northern part of Syria, and now bolstered by the training of US Special Forces.

With that in mind, it is no wonder that Turkish forces did not hesitate to engage rebel (i.e. mainly Kurdish) groups even despite the fact that they are backed by the US, creating a complication for the Obama administration's strategy on Syria big enough for Pentagon to put the offensive on hold.

If Turkey manages to paralyze the Pentagon's main protégé, it will be open to discussion as to who would have to take Raqqa. Maybe, the coalition (read US) ground troops? Or, what if, the Russian-backed Syrian army, steps in to save the day?

000000
Popular comments
Without the Syrian Kurds on the ground, it is impossible for the USA to win al Raqqah. Their choice is either to push the Turks to use ground troops or to ally with the Russian and use the Syrian army and its shia allies on the ground. Erdogan will not engage his army easily unless he is greatly rewarded before accepting to do so ( Gulen extradition) and he may face defeat because the Kurds , ISIS and the Syrian army will oppose the Turksih army. A dangerous gamble for Erdogan. If the USA refuses Erdogan's offer it will have no choice that to turn to Russia for support and recognize Bashar Al Assad's role. A third solution would be to just stop attacks on Raqqah and leave the whole job to Russia and the Syrian army running to risk of letting appear athe victorious. That is what we see now. Tough time for the USA!
vigilante
12 September 2016, 00:45 GMT
000000
The war on Syria would have been much cheaper if Qatar, the Saudis, the Turks, Western Europe and the US just gave each and every Syrian a million dollars to move elsewhere. As it stands now, the "West" has lost its money, its proxy army, the war on Syria, and its leadership position in the Middle East.
mvlazysusan
12 September 2016, 01:01 GMT1
000000
Newsfeed
0
New firstOld first
loader
LIVE
Заголовок открываемого материала
Access to the chat has been blocked for violating the rules . You will be able to participate again through:∞. If you do not agree with the blocking, please use the feedback form
The discussion is closed. You can participate in the discussion within 24 hours after the publication of the article.
To participate in the discussion
log in or register
loader
Chats
Заголовок открываемого материала
Worldwide
InternationalEnglishEnglishMundoEspañolSpanish
Europe
DeutschlandDeutschGermanFranceFrançaisFrenchΕλλάδαΕλληνικάGreekItaliaItalianoItalianČeská republikaČeštinaCzechPolskaPolskiPolishСрбиjаСрпскиSerbianLatvijaLatviešuLatvianLietuvaLietuviųLithuanianMoldovaMoldoveneascăMoldavianБеларусьБеларускiBelarusian
Transcaucasia
ԱրմենիաՀայերենArmenianАҧсныАҧсышәалаAbkhazХуссар ИрыстонИронауОssetianსაქართველოქართულიGeorgianAzərbaycanАzərbaycancaAzerbaijani
Middle East
Sputnik عربيArabicArabicTürkiyeTürkçeTurkishSputnik ایرانPersianPersianSputnik افغانستانDariDari
Central Asia
ҚазақстанҚазақ тіліKazakhКыргызстанКыргызчаKyrgyzOʻzbekistonЎзбекчаUzbekТоҷикистонТоҷикӣTajik
East & Southeast Asia
Việt NamTiếng ViệtVietnamese日本日本語Japanese中国中文Chinese
South America
BrasilPortuguêsPortuguese
NewsfeedBreaking
05:35 GMTFood Prices in Israel Much Higher Than in EU, Here's Why
04:46 GMTCOVID-19 Live Updates: Israel Closes Borders for Two Weeks Over Omicron Strain Fears
03:42 GMTHis Life, His Rules: Biden Spotted With Mask Down on His Chin While Inside Shop
03:28 GMTSouth Africa Laments Travel Restrictions, Calling Them ‘Punishment’ For ‘Excellent Science’
02:57 GMTGhislaine Maxwell Ready to Take Stand at Trial to 'Save Her Own Life' - Report
01:58 GMTMike Tyson Reveals Marijuana Makes Him 'Different Person' as He Launches New Cannabis Line
01:52 GMTConcerns About Spread of New Covid Strain Rise as Another Migrant Caravan Crosses Into US - Report
01:28 GMTMass Theft Occurs at Best Buy Store in Minnesota, Police Say
00:26 GMTTrump Keeps Mt. Rushmore Sculpture With His Face on It on Display in His Office
00:01 GMTA Glimpse of Hope: Biden Approval Rating Climbs 2 Points, But Still Scores Low on Economy - Poll
YesterdayAbbott Says Texas Is Ready For Possible Cold Winter Due to ‘Dozen Laws’ Signed
YesterdayBarnier Says France Has to 'Be Ruthless With the British' Amid Migrant Crisis - Report
YesterdayEx-Labour Leader Corbyn Slams 'Irrational' Suspension From Party One Year On
YesterdaySudanese Army Repels Attack by Ethiopian Troops With Casualties on Both Sides
YesterdayWHO Says No Need for Panic Over Omicron Coronavirus Strain as Much Remains Unknown
YesterdayBiden's First Christmas Tree Will Reportedly Cost Taxpayers $139,000
YesterdayMemes Flood Twitter After WHO Dubs New Covid Strain Omicron
YesterdayOmicron Coronavirus Strain May Already Be in US, Going to Spread 'All Over', Fauci Says
YesterdayNCT 2021 Walks Into a Dream in New Teaser Video 'Year Dream: Stage 2 - Surfing in Our Dreams'
YesterdayWHO Confirms Some Guesses on Why It Skipped Two Letters and Named New COVID Variant 'Omicron'