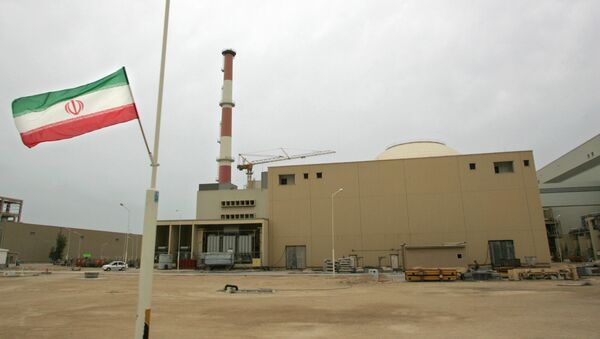 Construction of 2nd Nuclear Reactor at Iran’s Bushehr NPP to Begin in Q3 2019
BUSHEHR (Sputnik) — On Saturday, a ceremony devoted to the start of the construction was held in the Bushehr province. The Russian Experimental Design Bureau (OKB) Gidropress, a subsidiary of the state atomic energy corporation Rosatom, will be responsible for the development of a reactor for the NPP.

"The contract was signed with the OKB Gidropress, the development [of the reactor project] starts from the date of commencement of work on the Bushehr 2 NPP project, on September 10, 2016, " Valery Limarenko, the president of JSC NIAEP-holding Company within JSC Atomstroyexport, part of Rosatom, told reporters.

The Bushehr 2 project was rolled out by Russian nuclear experts in Tehran in 2014. Russia and Iran signed a deal to build the second and third reactors at the site in southern Iran in November that year, with an option of building six more in the future.

The Bushehr NPP will include two power units with a Water-Water Energetic Reactor, VVER-1000, the initial version of which was developed in Russia in the 1960s. Currently, this type of reactor is the most widespread in its series as there are 34 such operating reactors all over the world.