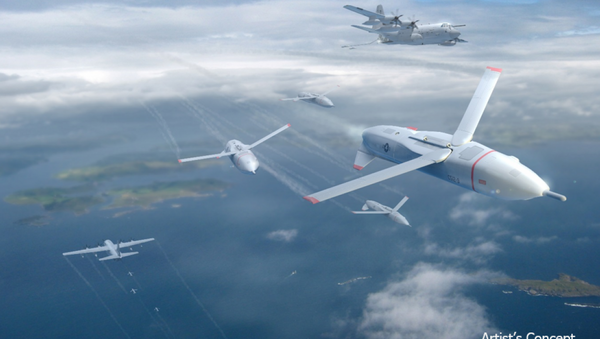 The US military’s low-cost miniature UAV program just became a lot more interesting with the concept of integrating the platforms with fighter jets that unleash a swarm of drones like bees from a hive perhaps explaining why the US Navy has called their branch of the larger project LOCUST.

While the US Navy’s program centers around the Coyote UAV, about half the size of an adult human, the Pentagon’s Strategic Capabilities Office (SCO) has developed an unmanned aerial vehicle known as Perdix that is 3D printed and only the size of a soda bottle making it ideal for launching from a fighter jet’s flare dispenser which military publication Defense One explains is "one of the few places a streamlined aircraft can fit expendable items."

"We designed Perdix to move quickly and to deal with weather, also to deal with temperature, and that’s really not something a hobbyist is paying for in a UAV," SCO spokesman Will Roper told reporters. "They probably don’t need something that works at minus-40. So we can’t go buy a UAV off a shelf, shove it in a flare dispenser, and hit the button and have it work. But what’s great and amazing is that every signle piece of Perdix has a part number. You could go order it and build one."

The design mold for the next generation weapon was designed in the Massachusetts Institute of Technology (MIT) Lincoln Laboratory and is part  of the Pentagon’s program of incorporating commercial solutions into the defense needs of the US military.

"Could the DoD go build an improvement on each of those components?" Roper asked rhetorically. "Absolutely. But it’s smart to stay inside the commercial base, because it’s going to improve itself. A lot of the pieces come from microelectronics that have been driven by the smartphone industry, and that continues to improve."

Roper explained that swarms of Perdixes have already been dispatched in tests from F-16s and F-18s with the group of drones designed to coordinate with each other to fulfill missions such as surveying a field, causing interruption for a trailing fighter jet, or potentially at some point even a lethal application against battlefield targets.

"Once it wakes up, stabilizing in flight, it’s trying to do the cross-links to all its brothers and sisters, and then it knows its mission," Roper explained. "And when I say 'it,' I’m really talking about the swarm. As a unit, they know what they’re supposed to do. So say we’re telling these guys to go out and survey a field. As a group they have that mission, and what they’ll do is allocate and optimize the best way to do it. All the user has to talk to is the swarm."