Europe's Palmyra: How Kosovo's Medieval Culture Was Demolished by Extremists 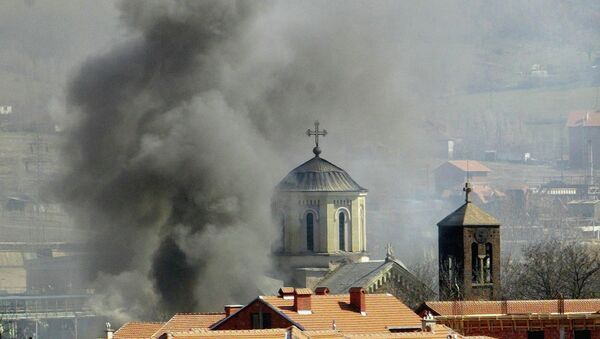 © AP Photo / Darko Vojinovic
Subscribe
Serbia organized an exhibition of cultural and historical heritage of Kosovo and Metohija in Paris, the headquarters of UNESCO, to serve as a reminder to the West of how they let it be destroyed since the 2000s.

Muslim Bigot Attacks Serbian Police Officers With Machete – Reports
There is a lot of Serbian cultural heritage in Kosovo and Metohija. Now, Kosovo is an independent state, partially recognized by Western countries. But the world was shocked by anti-Serbian riots organized by Albanians during the Kosovo unrest in 2004.  Many Serbian monuments were damaged in the chaos.

Albanian extremists living in Kosovo, since the 2000s, have continued to raid and damage Serbian cultural heritage monuments under the guise of a political crisis.

Last year, President of Serbia Tomislav Nikolic showed a film to foreign ambassadors about the anti-Serb riots in March 2004 in a bid to prevent Kosovo’s entry into UNESCO. The diplomats were shocked.

It is unknown whether the ambassadors understood that Serbian heritage in Kosovo does not belong to any particular time or any particular generation, but to all of mankind. The attempt to push Kosovo into UNESCO failed, however, the savagery of Albanian extremists continues today.

Art historian and former director of the National Museum in Belgrade, Nikola Kusovac, said that those who decide the fate of the most significant monuments obviously do not understand that it is thanks to these shrines that the Serbs maintain their identity and their roots. These monuments have a lasting value, Kusovac told Sputnik.

“It is ridiculous even to think that the hand of the one who destroyed and burned this heritage for years could now protect it. Their own heritage is limited to just the walls that they built around their homes. All those who do not have evidence of the creative spirit, now want to usurp those created by Serbian hands,” Kusovac told Sputnik.

The most recent episode was a fight with Kosovo police who were agitated by the fact that Serbs originally from the Kosovo town of Musutiste wanted to visit a ruined church of the Virgin Protectoress (Church of the Virgin Hodegetria), which is under UNESCO protection, as well as to visit graves of their relatives.

Despite that Serb pilgrims gather on ruins of Virgin Mary 14c church to pray- Musutiste Aug 2015,church before & now pic.twitter.com/O90FwIf7e0

​As the photo demonstrates, not much is left of the church, a symbol for not just Serbia but for Christians in the entire region.

In 1905, archaeologist and art historian Gabriel Millet visited the Serbian lands and wrote that a new world had opened up before him.

He immediately understood the specifics of Serbian Byzantine art and wrote that the monuments of Serbian medieval culture were quite special and unique.

UNESCO Committee Adds 8 New Sites on World Heritage List
A hundred years later, Millet’s covenants have been forgotten and the Serbian scientific community has once again been forced to show the world precious samples of Serbian cultural heritage.

The Government of Serbia organized the exhibition to attract the attention of UNESCO to protect the Serbian treasures located in Kosovo and Metohija. Almost forty ambassadors of the UNESCO member states observed the beauty of “Serbian Byzantium” in Paris.

It was just 20 years ago when West closed its eyes on the fate of this heritage and it seems like it is in no hurry to open them. More than 150 churches and monasteries were damaged in 2004 during mass attacks by Albanian extremists on Serbian shrines.

Among the rubble were monasteries on the UNESCO World Heritage list.

Ten medieval architectural monuments were destroyed just in Prizren, among them was the temple of the Mother of God Ljeviška, as well as the previously mentioned Church of the Virgin Hodegetria. The Monastery of the Holy Archangels was also almost completely demolished.

​After the demolition, UNESCO included the monasteries of Visoki Dečani, Gračanica and the Patriarchate of Peć into the list. It should be noted that in 2012, 2 million dollars of the funds slated for the restoration of Orthodox churches in Kosovo were allocated by UNESCO Russia.

Shortly after the destruction of the monuments, the Mayor of Venice Massimo Cacciari said it was as if the Cathedral of St Mark's in Venice had been destroyed or any other such important artifact in Italy or France.

Today, slogans of Daesh and other terrorist organizations are now visible on the shrines.

Perhaps this slogan best illustrates the extremists’ intentions. Daesh terrorists destroyed the ancient city of Palmyra because they believed that history began with them.