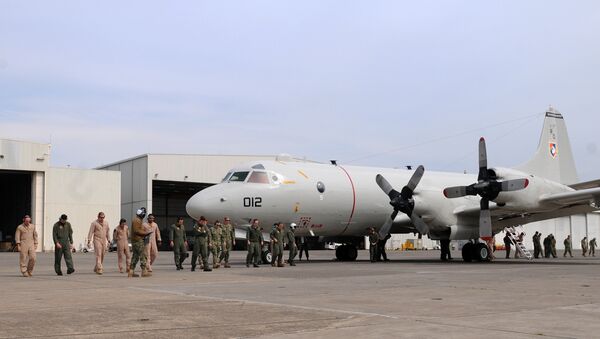 © Flickr / Commander, U.S. Naval Forces Europe-Africa
Subscribe
Over the past years, Italy has turned into a military colony. There are over 100 NATO and United States military bases across the country. There is a stockpile of foreign weapons and ammunitions in Italy, making the country a NATO and US military laboratory.

Italy's Involvement in Libya Limited to US' Use of Italian Bases
In an interview with Sputnik, Italian military journalist Antonia Mazzeo touched upon the military colonization of Italy and the risks it could pose for the European country.

Answering the question about the number of US military personnel in Italy, Mazzeo said that the figures have not yet been made public.

"However, we can find more or less precise information from requests the Pentagon sends to Congress and Senate to approve spending for military bases in Italy. There are over 10,000 military and civil personnel, plus their families," the journalist said.

Data revealed there are 60-90 nuclear warheads at the Aviano and Ghedi bases in Italy and the number is increasing.

Commenting on the issue, Mazzeo underscored that the presence of nuclear weapons in Italy is a violation of the Non-Proliferation Treaty signed by Rome.

"We can’t say that we don’t know anything about those warheads because they do not belong to the Italian military. In the event of an international crisis B61 warheads could be used by the Italian Air Force. It’s clear that this violates the treaty," he pointed out.

All About the Base: US Worried Brexit Will Mean Loss of US Bases in Europe
According to the journalist, another major problem is that the Italian authorities and people do not know what happens at the US bases in Italy.

"This problem has long been debated but there is still no answer. First of all, there are US bases and there are NATO bases. For example, the Sigonella base in Sicily is controlled by the US Air Force and Navy. The Italian authorities cannot know what’s happening there. However, part of this base is fully controlled by NATO, and the 41st regiment of the Italian Air Force is stationed there," Mazzeo explained.

Despite the fact that the situation with military bases in Italy violates the constitution and is not controlled by the parliament, the government does not want to interfere, he said.

"Public reaction is minimal. People even don’t know what is happening at the bases. Even the parliament doesn’t want to discuss the problem. Major media doesn’t cover the situation so it’s no surprise that people are not aware," the journalist said.

Being part of NATO’s aggressive policy, including the growing number of bases, could create serious risks for country’s national interests, he said.

"NATO has never been a defense alliance. It could pretend to be during the Cold War. But after the fall of the Berlin Wall its aggressive role became clear. The alliance has changed and become more complex. Some members like Turkey, France and Britain are not controlled by the US. Thus, there is the risk that Italy could be dragged into a more aggressive Atlantic alliance whose interests are different from Italy’s political, economic and military interests. Such an alliance would influence on the domestic and foreign policy in Italy," Mazzeo concluded.