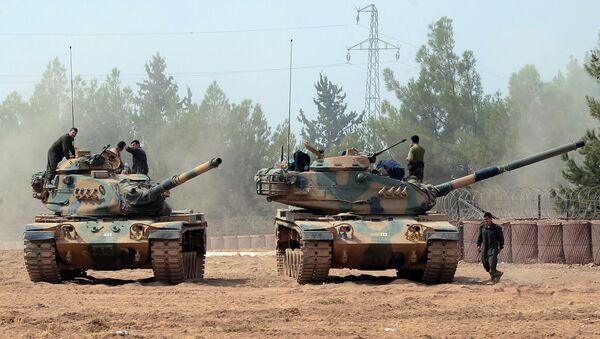 'Kurds are Primary Target' of Turkish Operation in Jarablus
The goal of the Euphrates Shield military operation is to establish a 90 km long and 40 km wide safe zone in northern Syria, Hasan Oktay, head of the Ankara-based Kafkassam Center for Strategic Studies, told RIA Novosti.

On August 24, the Turkish military launched an offensive against Daesh in the northern Syrian city of Jarablus. In turn, representatives of Syrian Kurds have claimed that the operation was aimed against Kurdish forces.

"Ankara wants to take control within a safe zone in northern Syria. This area will be nearly 40 km deep in Syrian territory and 90 km long at the Turkish border as Turkish leaders have repeatedly proposed," Oktay said.

According to him, a safe zone would allow for closing the corridor that could help connect two Kurdish cantons in Syria.

"Thus, this will prevent an autonomous Kurdish region in northern Syria. This will also eliminate the threat to country’s territorial integrity. A safe zone will also prevent Daesh militants from entering Turkey. As a result, the main goal of the operation is to take control over the areas which pose a threat to the country," the analyst explained.

Euphrates Shield Trap: Turkey May Find Itself Bogged Down in Northern Syria
The next stage would be to establish a political system based on preserving Syria’s territorial integrity which would prevent further spread of terrorism, he suggested.

Since the very beginning of the Syrian crisis, Ankara has supported measures aimed against President Bashar Assad. Turkey has sided with those fighting the Syrian government.

"Probably, this was the reason why Turkey supported Daesh militants and in the beginning stayed away from the anti-Daesh coalition. Then Daesh came to Turkey with a series of terrorist attacks. After a terrorist attack killed 54 people in Gaziantep, Ankara responded. In terms of international law, the operation is legal because there is a threat to Turkey’s national security," Oktay explained.

Turkey's Operation in Syria: 'Benefits Both Russia, US'
When Turkish forces entered Syria the government reaffirmed its commitment to preserving Syria’s territorial integrity, he added.

"The anarchy in northern Syria is a result of activities by many terrorist groups. From time to time, they shell Turkish border towns. This is a threat. The Turkish military will fight those groups," the analyst said.

At the same time, Oktay argued that the operation is not directed against Kurdish forces.

If Kurdish forces provoke the Turkish military there will be a response and their territory will be cleared, but in fact Turkey will be committed to fighting Daesh in Syria, he said.

Ankara-Backed Free Syrian Army Clears Turkish-Syrian Border of Daesh Militants
In order to have a legal basis for the operation, Turkey is now cooperating with the Free Syrian Army (FSA). But in the future, talks between Ankara and Damascus are possible, he underscored.

"The FSA has no future in Syria. I think that sooner or later Turkey will have to start talks with Assad. Prime Minister Binali Yildirim has already hinted at this scenario. Turkey’s top priority is to destroy threats coming from uncontrolled areas in Syria. For Ankara, Daesh and Kurds are terrorists. For Assad, the FSA is a terrorist group. So, finally, they will have to sit down to the negotiating table and discuss the FSA," Oktay said.

He noted that the key problem is the situation in Aleppo. Currently, key players are fighting to take control over the city.

"In the future, territorial integrity will be the main issue to discuss. Turkey will continue its policy on Aleppo. If Assad stays in power Ankara will insist that those in Aleppo who fought against Assad are not persecuted. Other important issues are Syrian Turkmen and refugees. There is a lot to do to settle the Syrian crisis," he concluded.