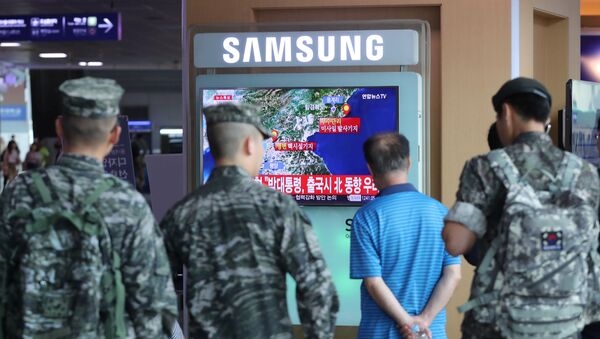 Russian expert on nuclear weapons Vladimir Khrustalev told Sputnik that North Korea has reached a "point of no return" in the nuclear field and is likely to possess all necessary technology for building nuclear weapons.

Friday's nuclear test carried out by North Korea for the fifth time has once again shown that despite tough Western sanctions the country has been able to still build nuclear weapons.

According to Khrustalev, the recent nuclear test could mean significant progress in the development of North Korea's nuclear program.

"There is definitely a very noticeable progress," the expert told Sputnik. "What we can say quite confidently is that the North Koreans are moving towards improving their nuclear capacity. In addition, they have now tested a standard missile warhead — at least, there is a corresponding official statement about that. And, based on the developments that they have shown in recent years, as well as the general logic, everything seems to be quite consistent with the developments common for other nuclear powers in the past," Khrustalev stated.

Automatic Sanctions Against North Korea May Backfire - Russian Envoy
North Korea officially acknowledged that on September 9 it conducted a nuclear test, a move viewed as a provocation by its neighboring states and strongly condemned by the international community.

Replying to the question, of whether the possession of nuclear weapons by North Korea will pose a threat to other countries, in particular Russia and China, the expert said that such scenario is quite unlikely.

"Russia and China are not directly threatened by these missiles. Like any other means of nuclear deterrence, they threaten those would attack the owner of nuclear weapons. It is obvious that it makes no sense for the DPRK to ‘go crazy' and press the red button without any reason. They could commit suicide in many other, simpler ways," the expert said.

According to Khrustalev, what North Korea seeks to do is to create a means of guaranteed credible deterrence which would give the country a relatively high chance of survival in case of a potential attack.

"In this case, any scenario of attack on the DPRK makes no sense because the attacker would pay a price that would scare away anyone considering such attempts. In fact, it is a reproduction of the model, which was between the Soviet Union and the United States and which now exists between India and Pakistan," the expert concluded.