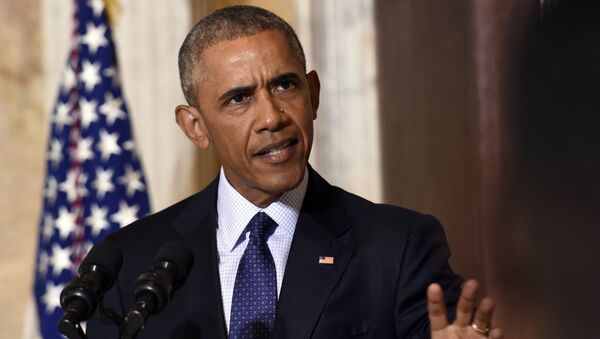 © AP Photo / Susan Walsh
Subscribe
According to the US president, the latest nuclear test carried out by North Korea on Friday severely threatens regional security.

"The United States condemns North Korea's September 9 nuclear test in the strongest possible terms as a grave threat to regional security and to international peace and stability," Obama stated on Friday.

Barack Obama said he spoke with his South Korean and Japanese counterparts the nuclear test carried, and they agreed to work with the international community on imposing additional measures on Pyongyang.

"We agreed to work with the UN Security Council, our other Six-Party partners, and the international community… to take additional significant steps, including new sanctions, to demonstrate to North Korea that there are consequences to its unlawful and dangerous actions," Obama said in a statement on Friday.

A fifth test, North Korea's most powerful nuclear experiment so far, is believed to have been carried out overnight at the country's northeastern nuclear test site.

The test was registered by monitoring services as having caused a moderate earthquake.

Spain, the chair of a UN Security Council committee on sanctions against North Korea, called on Friday for an emergency meeting following the latest nuclear test.