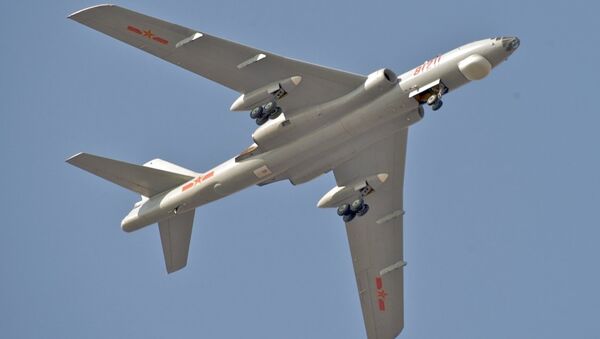 It is the first Chinese long-range bomber, specially designed for using cruise missiles and medium-range missiles capable of carrying other types of high-precision weapons.

According to the military expert, the aircraft has advanced avionics and an increased range. However, the aircraft cannot be regarded as a complete member of the nuclear triad because it does not meet the requirements that are needed to solve the problem of the US nuclear deterrent.

The latest version of the bomber is the heavily redesigned air-launched cruise missile-carrying H-6K, which, according to United States Department of Defense, will give the PLA long range standoff offensive air capabilities with precision-guided munitions.

The H-6K is designed for long-range attacks and stand-off attacks. It is also considered as a strategic bomber and according to reports is capable of attacking US carrier battle groups and priority targets in Asia.

This aircraft has nuclear strike capabilities, while previous models had limited missile capacities, the H-6K can carry up to six YJ-12 and 6-7 LACMs; a single regiment of 18 H-6Ks fully loaded out with YJ-12s can flood enemy ships with over 100 supersonic missiles.

However, according to Kashin, the Chinese Air Force needs a bomber which has a long range and high speed but is also not so costly to manufacture.

The potential jet needs a powerful set of electronic warfare and it should be hardly noticeable to the enemy radar. The manufacture of such a jet will have a very difficult technical task.

As the expert noted, according to some provided information, China has previously worked on its US counterpart, the B-2 bomber. At what stage the progress is remains unknown, Kashin pointed out.

Russia is also working on its analogue of B-2 bomber, but right now it looks like the project has been postponed. Currently, the production of an upgraded version of the Tu-160, which will have the name Tu-160 M, has become a priority.

White Swan: When Will Modernized Russian Tu-160 Bomber Hit the Skies
The new Russian jet will be equipped with new electronics and improved engines. It is believed that such an approach would enhance the long-distance capabilities of the bombers at a relatively low cost.

The Tu-160 has a wide scope for improvement in its design, thanks to its huge size and high speed. The Chinese, alas, do not have such a platform from which they could move forward, according to Kashin.

There have been numerous past attempts by the Chinese to gain access to Soviet material in this field. China has been trying to get materials and samples of the Tu-22M3 bomber in Russia and has made unsuccessful attempts to buy several replicas of the Tu-160, which remained in Ukraine in the 1990s.

Another matter that the Chinese Air Force will have to consider with their new bomber jet would be its ability to function far away from its borders as the Russian Tu-160 and Tu-95, as when they were used to strike on terrorist positions in Syria using cruise missiles.

In any case, the shape of the future Chinese bomber is an  extremely important indicator of what kind of conflicts and missions the PLA Air Force is currently preparing for, the military expert concluded.