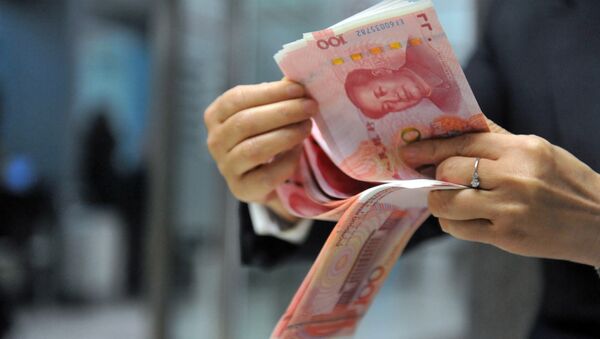 © AFP 2023 / STR
Subscribe
International
India
Africa
BRICS New Development Bank (NDB) President Kundapur Vaman Kamath said that strengthening of the international role of the yuan is in line with the greater role that China is playing in the global economy.

The IMF approved the yuan status of a reserve currency in November. The G20 leaders earlier this week praised in their final communique after a summit the IMF's decision, which is expected to enter into force October 1.

"In my opinion, strengthening of the international role of the yuan is in line with the greater role that China is playing in the global economy. It also contributes to improving the resilience of the global financial system. Thus, IMF's decision to include the yuan into the Special Drawing Right (SDR) currency basket on the 1st of October can be viewed as an important practical step," Kamath said.

Russia, China Building Yuan-Based Alliance Against Dollar
The IMF’s decision concerning the yuan status was one of the topics on the G20 summit agenda in China's Hangzhou, where the leaders discussed ways to make world economy more resilient in face of such shocks as Brexit or slump of oil prices.

As the yuan is becoming stronger, the NDB issued its first five-year green bonds valued at 3 billion yuan ($448.9 million) on China's interbank market in July.

The NDB was established by BRICS member states in July 2014 to finance infrastructure and sustainable development projects both in BRICS and other developing countries.