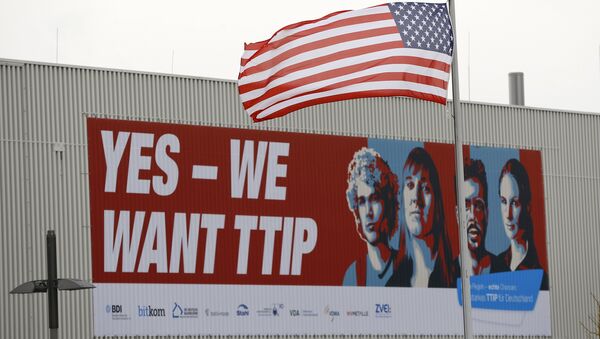 The standards that are due to be set in the TTIP will be the highest in the world and may serve as a basis for all future agreements in the spheres of banking regulations, food safety and environment, Joachim Pfeiffer, a member of Germany's ruling Christian Democrats (CDU/CSU) bloc, told Sputnik on Thursday.

MOSCOW (Sputnik) — His comments came amid a recent wave of statements by numerous EU officials about the viability of the deal that seeks to establish a free trade zone between the European Union and the United States.

"There will be no race to the bottom. The EU and the USA are the markets with the highest standards in the world. The TTIP standards will be the highest in the world and they can also become a global role model for banking regulation, food safety or environmental issues, just to name a few," Pfeiffer, also a member of Germany's Bundestag Committee on Economic Affairs and Energy, said.

The TTIP agreement has drawn severe criticism for the tremendous power it would potentially give to international corporations as well as for the lack of transparency in the negotiations as its details have not been released to the public.

TTIP is Multinational Companies' Attempt to Become 'New Feudal Barons'
He added that though it was the European Commission that negotiated the deal, not Germany, Bundestag members still have the access to all relevant documents, which the lawmaker called a unique possibility that has never been practiced for any other negotiations before.

According to Pfeiffer, history proved that integration processes in the European market and free trade have been Germany’s and Europe’s way to prosperity and led to wealth within the bloc today, while some protectionist measures in contrast proved to be non-beneficial.

"The Transatlantic Trade is one central pillar for our future prosperity," the German lawmaker concluded.

The optimistic stance on the TTIP expressed by the ruling Conservatives led by German Chancellor Angela Merkel contradicts the cautious position of their junior partners Social Democrats (SPD). The SPD chairman — Economy Minister Sigmar Gabriel — recently declared that the negotiations between Europe and the United States on the TTIP "failed," with the four leading associations of the German economy demanding this week in a joint letter to Gabriel to be more involved in the free trade agreement with the United States.