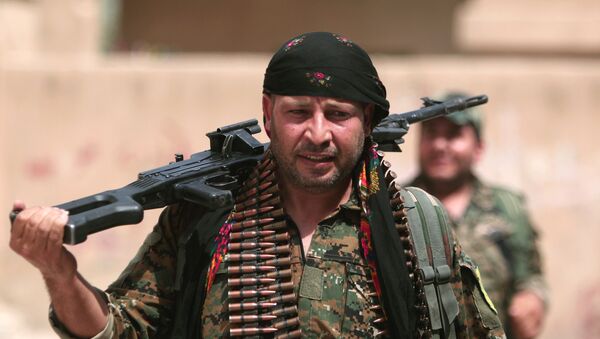 Syria's Kurds have been among the bravest and most effective force in the war against Daesh. Sadly however, as things stand, they may also be on course to be the most treacherous.

Whether organized under the auspices of the YPG (People's Protection Units) or SDF (Syrian Democratic Forces), there is no doubting that the role of the Kurds in northern Syria, in first resisting and latterly taking the fight to Daesh, will go down in history.

As they continue their advance through Raqqa Province, closing in from the north, it is clear that with the backing of US military forces they are intent on exploiting the chaos of the conflict to carve out their own autonomous territory of Rojava (Western Kurdistan) with Hasakah as its capital. 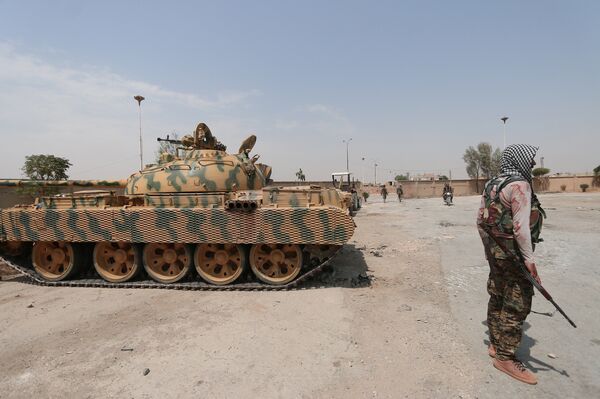 Syrian concerns over the Kurds' intentions were initially raised in March, when at a meeting in the town of Rmeilan in Hasakah Province, the Kurds and their allies unilaterally declared a northern autonomous federation, which understandably, the Syrian government refused to either accept or recognize.

In January, two months prior to the declaration of said northern federation by the Kurds, US troops had taken control of an airfield just outside Rmeilan. It doesn't take a genius to discern a connection between both.

Indeed there is something undeniably murky when it comes to the manner in which the Americans have developed a close military alliance with the Kurds over the past few months, even at the cost of incurring the extreme displeasure of their NATO ally, Turkey.

It suggests, that in the Kurds and various other groups that make up the SDF, the Pentagon believes it has finally fastened onto the "third force" it has been trying to cultivate within the conflict, as a wedge between the Assad government and Daesh, with an eye on asserting a military and geopolitical presence in the country.

In this respect, there is no reason to believe that regime change in Damascus is off Washington's table, though as with Iraq after the first Gulf War in 1990-91, the willingness of the US to abandon the Kurds as and when it suits, should give the Syrian Kurds pause for thought when it comes to trusting any promises or pledges of support that come gift-wrapped in an American accent.

The Kurds, we know, thanks to Sykes Picot are the largest stateless people in the world, spread between four nations in the Middle East — Iran, Iraq, Syria, and Turkey, along with a wider Kurdish diaspora spread mostly across Europe. There is no accurate figure when it comes to the size of the Kurdish population, but it is thought to number anywhere between 20-30 million. That being said, it would be a mistake to consider them a homogenous group.

How could they possibly be so, after generations spent fragmented across different countries, regarded with suspicion and mistrust and experiencing regular bouts of repression in the process? 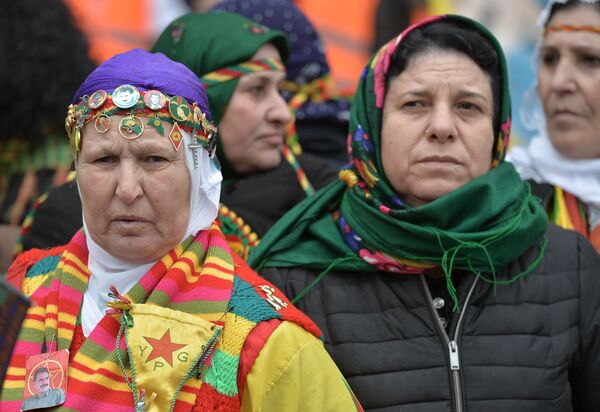 Women members of the Kurdish community take part in the annual rally of Kurds from all over Europe. February 13, 2016, Strasbourg.
© AFP 2022 / Patrick Hertzog

There are 2.5 million Kurds in Syria, predominately located in the north, close to the border with Turkey, and in 2011 President Assad granted 300,000 of them citizenship, a gesture his opponents and detractors in the West dismissed as instrumentalist.

The Syrian officers were separated from the soldiers and executed.

Though it has long ceased to matter in Washington, US ground forces operating in Syria without the prior consent of the country's legitimate government constitutes a violation of the country's sovereignty and does not bode well when it comes to trusting US motives going forward. Where Washington is concerned neither the Syrians or Iranians or Russians are under any illusions, of course, and will no doubt be prepared for any eventuality.

There is also the no small matter of Turkey's determination to lump the Kurds in the same box with Daesh, thus adding another layer of intrigue to this unfolding drama. The notion that Ankara would stand by while something approximating to a Kurdish state is established on its border at any time, never mind at a time when it is engaged in a military campaign to crush the PKK, is delusional in the extreme.

It is why the recent Turkish incursion into northern Syria was no surprise, drawing a line against the growing power and confidence of US-backed Kurdish forces.

It was the English poet William Blake who said, "It is easier to forgive an enemy than to forgive a friend." The brave men and women of the YPG and SDF could do worse than bear the wisdom of those words in mind.

The Kurds have revealed throughout their history a proclivity for accepting the support of any imperial power to further their aims of a state of their own. This has been their mistake. Whatever imperialism gives with one hand it can and often does obliterates with the other.