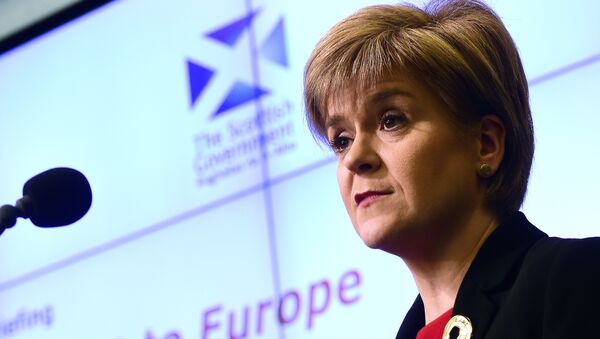 © AFP 2021 / EMMANUEL DUNAND
Subscribe
Scottish First Minister Nicola Sturgeon told Parliament on Tuesday that legislation for a new independence referendum is being drafted by her country’s government. This comes a week after the Scottish National Party surveyed 2 million Scots about their attitude on Scotland seceding from the United Kingdom.

Sturgeon didn’t give a timeline for the legislation, but said the bill would be set for an "immediate" launch if it was found that a majority of voting Scots were in favor of secession. She told parliament, "We will consult on a draft referendum bill so that it is ready for immediate introduction if we conclude that independence is the best or only way to protect Scotland."

A slight majority would prefer for Scotland to remain a part of the UK, according to recent polls, though many are dissatisfied with the prospect of leaving the European Union, after Scotland voted to stay. Sturgeon has vowed to make good on the vote to stay in the EU, using any legal tactic available, possibly including a renewed vote for independence.

The minister suggested that, even though the last independence vote was just two years ago, the British vote to leave the EU, referred to as "Brexit," has drastically shifted sentiment around the independence question, which failed by some 10 percentage points in 2014.

Sturgeon said, "The Scottish National Party cupboard is bare, except for the only idea they ever had, to split up the UK."

Conservative leader Ruth Davidson has called a renewed  effort for independence "an endless political campaign" and "a warm-up act to nudge the independence caravan another few inches along the road." Davidson decried the "threat" of a new vote and criticized the SNP for what she termed a "failure to listen" on economic issues.

"I do not subscribe to the view that we are helpless to act in the face of Brexit," she said, adding, "nor do I think that breaking up a union worth four times more to Scotland than the EU is going to help matters very much."

Because of the support Sturgeon receives from the Scottish Green Party, she has a parliamentary majority. On Friday she told BBC radio that, "The issue of EU membership was central to the referendum campaign…The ‘no’ campaign, though it was nonsense, said the only way to protect our EU membership was to vote 'no.'"

Sturgeon remarked that a "demand for a second independence referendum would be probably unstoppable."