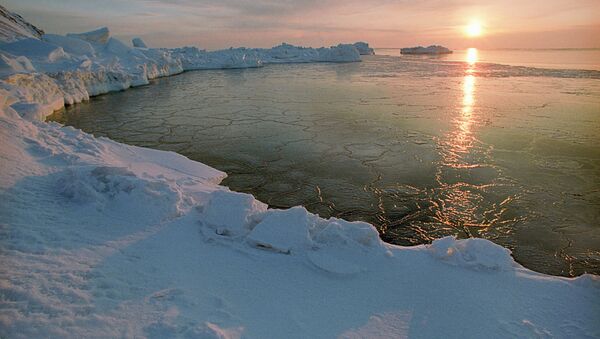 © Sputnik / Alexander Liskin
Subscribe
International
India
Africa
Scientists of the Siberian Branch of the Russian Academy of Sciences are developing a research station to explore the Arctic region.

Russian Helicopters to Showcase Arctic-Ready Mi-8AMTSh-VA at Army-2016
MOSCOW (Sputnik) — Scientists of the Siberian Branch of the Russian Academy of Sciences (RAS) are developing a research station drifting with an ice floe to explore the Arctic region with a unique electromagnetic method, local media reported Wednesday.

"Scientists from the Trofimuk Institute of Petroleum-Gas Geology and Geophysics of the Siberian Branch of the RAS are developing a project of deployment a drifting station on one of them [ice floes] to conduct exploration with the use of a unique geophysical method… The scientists proposed to use for research of the Arctic region an unusual electromagnetic method: exploration with the use of vertical currents," the Science in Siberia publication said.

According to the edition, the technology is based on the use of circular electric dipole, allowing to detect geological anomalies, and it has already been tested to look for hydrocarbons below the surface.

The publication added that the station would be used to explore the region for oil, as well as to explore the shelf plate to specify the issue of boundaries between the states there.

The importance of the Arctic region has been increasing in recent years as the melting of the region’s sea ice has opened the possibility for further exploration of petroleum reserves in the area, as well as for navigation through the Northern Sea Route.