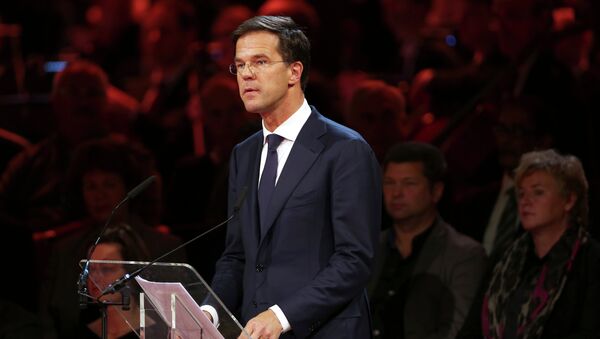 The Turkish Foreign Ministry criticized Dutch Prime Minister Mark Rutte for his remarks on ethnic Turks living abroad, in particular, in the Netherlands.

About 90% of Turks Not Considering US Ankara's Strategic Partner
MOSCOW (Sputnik) — During the July coup attempt in Turkey, a group of young men reportedly attacked a cameraman of the Dutch NOS broadcaster. Shortly following the coup, cities across Europe, including Rotterdam, held demonstrations outside the Turkish embassies, supporting the Turkish authorities. Rutte recalled the developments last week, and said that the Turks who were unable to integrate would better return to their homeland.

"In a time where xenophobic statements and attacks are on the rise, these remarks will harm our efforts to help Turkish people participate in the social life of the country they reside," Foreign Ministry spokesman Tanju Bilgic said, as quoted by the Daily Sabah newspaper on Tuesday.

He added that the remarks made were "inappropriate" for a prime minister, as he generalized an isolated incident, which was not a regular thing.

On July 15, the Turkish authorities said that an attempted coup was taking place in the country, which was suppressed the following day. Following the coup, thousands of people, mostly officials, legal and educational workers, were detained or dismissed, commonly over alleged ties to suspected mastermind of the coup attempt, Islamic cleric Fethullah Gulen.