Syrian War: 'Nothing to Do With Daesh, It is Energy Battle for Future Pipelines' 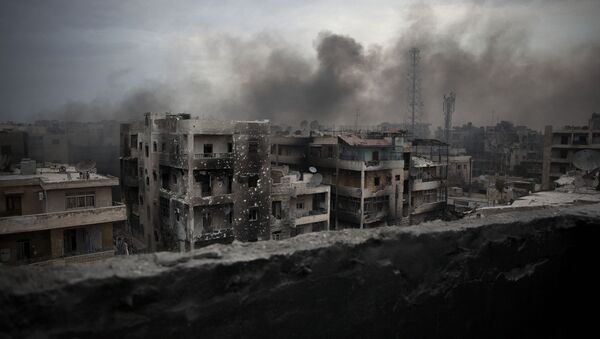 © AP Photo / Manu Brabo, File
Subscribe
International
India
Africa
German online newspaper Deutsche Wirtschafts Nachrichten has provided its own analysis on the developments in Syria, noting that the severest clashes occur only in places of major pipelines or where new routes are planned to run; hence it says, the conflict is nothing more than a fight for the best positions to start oil and gas supplies to Europe.

Behind the Smokescreen: What Turkey is Aiming For in Its Syrian Campaign
The newspaper has attentively examined the Syrian war map and noticed that the military actions are going on only in places where major oil and gas routes are either already running or are planned to go.

“Through the territories of the two cities runs a major pipeline which transports oil from Iraq to Syria, up to Idlib Governorate,” it says.

The same pipeline runs through the territory of the city of Aleppo.

Whoever takes Manbij, takes under control of the oil transportation in Syria, it says.

The same is true for the Syria’s western cities of Aleppo, Idlib and al-Bab. In the east, the same pipeline runs through the cities of Raqqa and Deir ez-Zor.

Washington's Two Strategies in Syria Canceling Each Other Out
So far in the Syria conflict, Turkey has had no access to the oil pipelines, it says. But by taking Manbij, Ankara will get access to the Syrian pipeline system.

“The current battle for Aleppo is viewed as the most decisive in the ongoing conflict: Aleppo is the last major city which the country’s main pipeline runs through,” it says.

“Whoever controls Aleppo, controls the ‘keys’ of the pipeline.”

The newspaper points out that the most intensive fighting between the warring parties is taking place at the key points of the pipeline, namely Raqqa, Deir ez-Zor, Aleppo, Idlib, Manbij in Hasakah, al-Bukamal, Ayn Issa and al-Bab.

Fierce fighting is also going on in the cities of Homs and Hama. And previously the war was raging in Palmyra, the outlet notes. All the settlements are located alongside the planned pipeline route which is set to run from Qatar to Turkey.

The newspaper says that in its turn, Russia is supporting the construction of a gas pipeline that is set to run from Iran through Iraq and Syria, through the city of Homs. Therefore Moscow does not want Homs to fall into the hands of Islamist mercenaries.

Operation Euphrates Shield: A Trap for Turkey or 'Endless War' for Syria?
The Syrian war map also shows that the US particularly concentrates its air strikes on the east of the country while Russian air strikes are mainly focused on its western areas.

The outlet therefore concludes that Russia wants to control western Syria in order to prevent the construction of pro-Western pipelines.

For the US, in its turn, it is important to prevent the construction of pro-Russian pipelines — such as the Iran-Iraq-Syria pipeline in the east.

Besides, there is another proposed pipeline which is supposed to connect Israeli Golan Heights with Turkey through Syrian Damascus.

On condition of the toppling of the Syrian government, Israel would have strengthened its positions as a rising gas supplier, however Russia does not want any competitors in this sector, the newspaper says.

It further refers to the reports of the Caucasus Strategic Research Centre (KAFKASSAM) in Ankara which suggest that the true purpose behind the attempt to set up the so-called "Kurdish corridor" was to transport Kurdish oil and gas from northern Iraq over northern Syria to the Mediterranean Sea.

This is How US Policy in Syria May Change During Obama's Successor
The reports also suggest that the US had plans to build a new pipeline from the Persian Gulf to northern Iraq and further to Turkey through northern Syria.

Thus, it planned to supply Iraqi oil through Turkey and northern Syria further to the West, namely to the European energy market.

However the plan to set up the Kurdish corridor failed because Russia stepped into the Syrian conflict.

Russia is against this corridor because it wants to keep Europe as the major customer of its energy products.

Under no conditions will Russia give up its position on the European market, the newspaper finally states.